US-Iranian Confrontation in the Persian Gulf. What Lies Ahead?

By Yuriy Zinin
Story Code : 806194
Islam Times - Tensions which have been escalating since May this year between the US and Iran in the Persian Gulf and Washington’s military intervention have been making headlines in the Middle East.
The Saudi newspaper “Asharq al-Awsat” describes how the US has recently been ramping up their military presence in the region as dangling the sword of Damocles over Tehran, which aims to prevent any “provocations or attempts to expand.”

Media outlets in the Arab world are drawing attention to the 9 foreign military bases located in the Gulf, five of which are American.  On top of that, there are 54 thousand US soldiers stationed at 12 bases in the Middle East.

News outlets in the Gulf countries blame the “regime of Iranian mullahs” for all the troubles and upheavals in the Arab world, as well as for increased regional tensions and toxicity.

Opinions may differ in Arabic media, but a common thread runs through them, the apprehension and fear of probable scenarios, fraught with dangers and risks, if conflict were to break out between the US and Iran.
Journalists describe the situation as “balancing on the brink of war.” Former US Secretary of State John Foster Dulles was an advocate of brinkmanship in foreign policy when he was in office in the fifties. Bringing the world to threshold of confrontation, only the fear of mutual destruction saved the two nuclear powers from annihilation.

The media is narrating a foreboding scenario of war, with catastrophic consequences. Armed conflict could blow up between the two sides, its shell fragments could be thrown in all directions and hurt a lot of people in the region. Different allies on both sides may get drawn into the conflict, along with their agents in the region. The cost of a war would be great, and its death toll could be hundreds of thousands of people.

According to the predictions, there would be thousands of new refugees, some of whom might become militants and go on to fight against US occupying forces in the region for years.

Some political analysts believe that Baghdad runs the risk of paying the price of a war between Washington and Tehran, which would leave Iraq in an extremely harrowing situation. Iraq is tied up in very close relations with the two hostile countries.

Other observers in the region believe that it will not get that far, there will not be a war unless both sides get carried away. Attention is being focused on the two leaders heading the opposing sides, especially Donald Trump, who has announced he will run for a second term.

Observers in the Middle East highlight the fact that strikes on Iran would be similar to the missile attack on Syria in April 2018, as Donald Trump is not able to guarantee that Iran’s response will not draw America into another major war without any constraints.
In order to secure a second term, Trump needs rhetoric to inspire his audience in America with his plans to make the United States prosper, and he does not want to look like he is losing on foreign policy. The American voters rejected leaders who waged a series of wars in the Middle East with questionable results, replacing them with other election candidates. This primarily hurt Barack Obama’s popularity.

A number of experts interpret Iran’s stubborn behavior as an act of provocation, to provoke an attack from the United States and then bring in the UN Security Council to deal with the situation. Iran’s goal is to bring the conflict out of the shadows and make it a topic for international discussion, in order to ultimately receive dividends and weaken the stranglehold of sanctions that Washington is trying to impose on Tehran.

In this regard, the neglected flywheel of US sanctions against Iran is being brought to the fore. The sanctions are meant to hurt the country, to worsen the situation in Iranian industries which provide employment for tens of thousands of citizens. The White House wants to fan the flames of mass discontent, based on the example of Poland’s Solidarity movement which took place in the seventies, led by Lech Wałęsa.

Some political scientists in the Middle East believe that this will eventually bring Tehran’s regime to its knees. Others argue that the Iranian authorities, who have endured decades of economic, commercial and other restrictions and limitations imposed on the country, will be able to stand its ground like Cuba did.

Regional media sources note that the US-Iranian confrontation in the Persian Gulf can be traced back 40 years, when the regime of the Islamic Republic of Iran was established. For all these years, the United States has been putting pressure on Iran, and although it has caused a great deal of damage to the country, it has not toppled the regime or led it to it abandoning its policy.

The US deliberately exaggerated Tehran’s military activity and the serious threat it poses to Washington’s allies, as well as to the peace and security in the region. According to experts, this was done in order to intimidate US allies – the Arab monarchies, to keep them dependent and “milk their wealth”.

Whether or not this is the case, concerns are growing among commentators, as there are fears that the campaign of threats the US is leading against Iran might accidentally blow up and cause a real explosion. 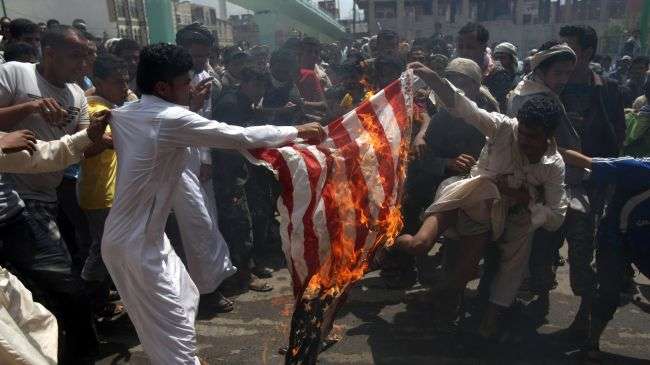 US Chickens come home to roost
Islam Times - “We came. We saw. He died.” U.S. Secretary of State Hillary Clinton commenting on the death of Libyan leader Muammar Qaddafi 20 October 2011.
What Lies Ahead
What lies ahead for Syria after UNSC veto of AL plan?
US Health Chief Arrives in Taiwan on Trip Condemned by China
US Should Give Chinese Companies Level Playing Field: Envoy
US Has Just Received Big Blow In Intelligence War Against Iran
US Putting More Troops on Russia’s Borders to Deter Moscow: Esper
US Supports Unrest in Lebanon in Hope of Regime Change in Blast-Devastated Beirut
Comment
Beijing Says China Has No Interest in US Internal Affairs
Trump Plans to Invite Putin to G7 Summit in US
Netanyahu Blames Washington For Stalled West Bank Annexation
Russia’s Health Ministry Approved World’s First Covid-19 Vaccine
Convoy Carrying Military Equipment for US Attacked on Iraq-Kuwait Border
Russia Calls on US to Stop Pumping up ME with Weapons
With an Eye on Balkanization, Israel throws Support Behind Separatist Militants in Southern Yemen
Snapdragon Processor Flaw Puts 40% of Phones at Risk of Hack
Trump Rushed from Briefing Room After Shooting Unfolds Outside White House
Hong Kong: ‘Freedom’… to Subvert
Trump ‘is a first-degree mass murderer’ and ‘the most successful bio-terrorist’ in history: Famed psychologist
Russia Says Oil Deal Between US Firm, SDF Shows Washington’s Continued Violation of Syria’s Sovereignty
Fire Hits High-speed Rail Station in Saudi Arabia’s Jeddah
Sayyed Nasrallah: Impartial Probe Necessary into Beirut Blast
Stars Without Borders