By: Finian Cunningham
Story Code : 845977
Islam Times - In announcing Richard Grenell as the new acting Director of National Intelligence (DNI), President Trump had high praise for the 53-year-old diplomat, saying: “Rick has represented our country exceedingly well and I look forward to working with him.”
If by “representation” Trump means insulting a host nation exceedingly well on behalf of the president, then, yes, Grenell has been outstanding in his role up to now as American ambassador to Germany.

Within hours of his appointment as US envoy in Berlin back in May 2018, Grenell riled German politicians and businessman by issuing a high-handed ultimatum that the country should “immediately” halt all commercial dealings with Iran. In delivering that undiplomatic message, Grenell was loyally relaying his master’s voice from the White House and the president’s death-wish for the Iran nuclear accord.

During his two-year tenure in Berlin, Grenell has alienated so many German politicians from his outspoken acerbic manner that Chancellor Angela Merkel and other senior government officials have reportedly refused to meet him. He has been accused of interfering in German internal affairs and acting like a viceroy in some colonial outpost.

It would seem rather surprising therefore that a mouthy maverick who has also worked as a Fox News pundit is now being given the top US intelligence portfolio. First, there is the supposed confidential sensitivity required for the post. Secondly, Grenell has zero experience in intelligence work.

As acting Director of Intelligence, Grenell will oversee all 17 agencies that make up the US intelligence community, including the CIA, FBI and National Security Agency. It will be his responsibility to provide the Daily Presidential Briefs (DPBs) to Trump on national and international security concerns.

That new task seems extra challenging given that Grenell is reportedly keeping his post as ambassador to Germany during the three-month period while he is serving as acting DNI.

A permanent post as DNI has not been filled since Dan Coats stood down last August due to policy differences with Trump regarding North Korea, Russia and Iran. Grenell comes in to replace Joseph Maguire who was up to now serving as acting DNI. By definition, the acting position is a limited, temporary one until the post is made permanent.

It is unlikely Grenell is being groomed for the permanent position as DNI because the full-time appointment, unlike the present acting capacity, would have to be vetted by the Senate. Already, there is a much umbrage among senators, including Republicans, over what is being seen as Trump politicizing the intelligence post by giving the top job to someone conspicuously lacking in qualifications. The latest appointment by Trump underlines growing unease that the president is increasingly ruling by patronage.

Since its creation in 2004, the DNI has always been recruited from senior intelligence or military professionals. Grenell is seen as a Trump loyalist who is being rewarded by his boss in the White House for no other reason than being a loyalist, or less politely, a Yes Man.

On one hand, ironically, this may be a good thing. The fixture shows Trump has little time for “professional intelligence”. Not having spooks from the Deep State whispering into Trump’s ear keeps their machinations at bay. Grenell is hardly a Deep State cipher. He is more a Trump clone. His controversial remarks as ambassador in Berlin are seen as self-serving attempts to ingratiate himself with Trump.

On the other hand, being a Trump toady will reinforce the president’s ignorant and outré prejudices on international matters. As we have seen from his admonishment to German businesses over the nuclear deal, Grenell is a hawk when it comes to policy on Iran. His counsel to Trump on that score will play to Trump’s impetuous instincts. At a time of dangerous, volatile relations with Tehran, that kind of Yes Man in the Situation Room is undesirable.

In regard to Russia, Grenell has also shown hawkish stripes. Last year, he threatened German businesses with sanctions over the Nord Stream-2 gas project. Again, his intervention was seen as breaking the conventional rules for diplomats and displaying contempt for his German hosts. No doubt the high-handed warning over Nord Stream-2 was, again, in part motivated by Grenell’s ambition to please Trump’s hardline position.

The same can be said for his keenness for hectoring Germany and other European states to increase spending commitments to the NATO alliance. Trump has made that complaint a signature of his presidency. Grenell has loyally acted as Trump’s ventriloquist doll when it comes to gouging Europe for subventions to the American military-industrial complex via NATO budgets.

Several US intelligence officials have expressed disgust at Grenell’s appointment. Some have described the new DNI as “frightening” given his dearth of qualifications.

Frankly, one can hardly get more frightening and dangerous than the supposed professionals who have previously headed up the US intelligence community. After all, it was former DNI James Clapper who was instrumental in creating the Russia collusion hoax which so damaged bilateral relations between Washington and Moscow.

Having an openly gay, showboating part-time ambassador as DNI for three months can hardly get much worse.
Share It :
Related Stories 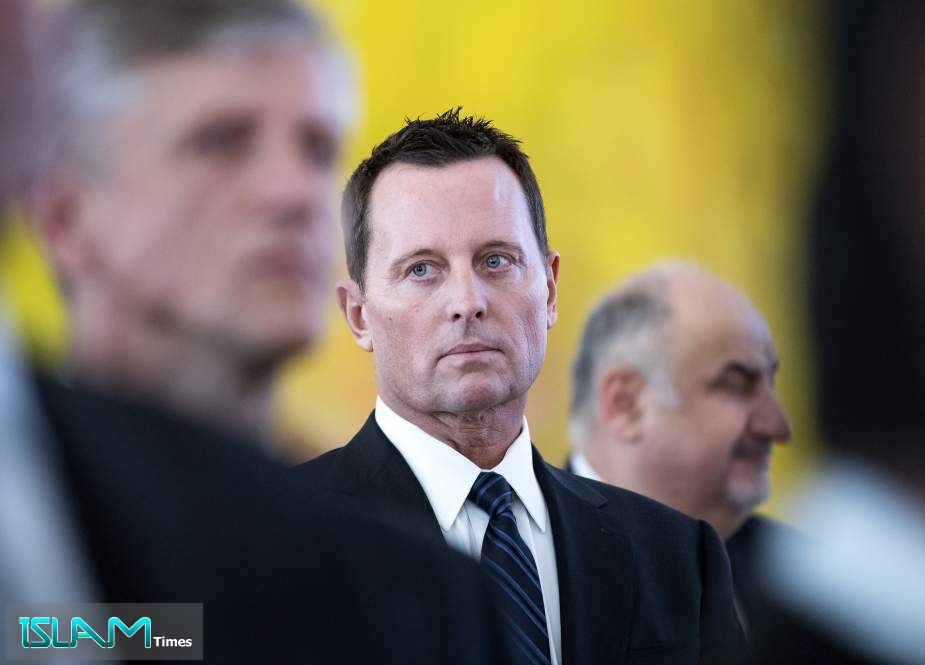