By Chris Faure for the Saker Blog
Story Code : 908235
Islam Times- the Russian Ministry of Foreign affairs are better journalists than anything else in English coming out of Russia. Take a look at this. Mike Pompeo opened his mouth with Russia, Russia, Russia and how tough this US administration is on Russia. The Ministry of Foreign Affairs of Russia soon responded with Pompeo’s tweet superimposed on a gif of a painting of Napoleon’s retreat from Moscow. Now this makes a clear statement and is journalistic gold.
Recently on the Saker blog, we had these two articles:
http://thesaker.is/russia-vs-a-biden-administration/
http://thesaker.is/not-a-step-back/

Whether you are in agreement with the representations in those articles or not, the fact is that they were better than the Russian English media. Yes, I am talking about RT, Sputnik, and even TASS English.

Russia, you need an English hard news outlet and an English hard news channel because you are not doing this sympathetic westerner any favors. I can see half-arsed half-naked girls and boxers and wrestlers with blood from broken noses, anywhere. Good media does not routinely feature this mishmash front and center on home pages.

We need some Russian ‘propaganda’ done right. The standards of the English media coming out of Russia are yellow and dropping by the week.

Let’s start with RT and we have to say, what is this? They ‘question more’ but cannot decide if they are a magazine, a hard news outlet, or a tabloid in the style that one used to be able to buy at the supermarket checkout with vague pixellated pictures of aliens on the front page. Take your sports section off the middle of your home page. Put the girls somewhere else. Sport is traditionally back page content. Replace the surfeit of western correspondents with good Russian correspondents. And now you’ve changed your headers to be true clickbait with screaming words in capitals in the middle of the headline.

Let’s follow today’s Assange story through RT, Sputnik and TASS, as a case in point.

Today the news broke that Julian Assange will not be extradited to the US. Your headline states: Assange WON’T be extradited to US on spying charges in shock decision at London’s Old Bailey
Is it a shock decision, or is it a welcome decision? Or are the supporters jubilant as stated in your first sentence on this report?  Or can you not figure it out?   Between ‘jubilant’ and ‘shocking’, there is a loose and unfocused article repeating old information.

The 2nd article on RT Breaking News on the topic of the court ruling on Julian Assange is an English columnist as Op-Ed correspondent.

What do the Russians think about this? What is the Russian view? Where is your categorization – for example, ‘All Assange Reporting’? And then, your 3rd article tells us what China Daily says, for heaven’s sake. Have you no Russian view?

Where is your very own Russian George Galloway, RT?

The Iranian media is better than this, as they report about Iran. I find more hard news on Russia in the Chinese media than on Russian English media.

RT, you have good documentaries and this one I found exceptionally good. But it is about Japan. At the beginning of last year, Mr.Putin announced the opening of extensive 2ndWW archives. And so far RT, I have seen nothing; no follow through on this important statement that is clearly one of Mr.Putin’s major objectives and projects. Whose side are you on?

Sputnik oh Sputnik. You seem to be wanting to take off to some ‘Sputnik space’ by repeating tweets. You don’t report, you repeat tweets and fill in fluff between the tweets and tell us what others tweet.

Let’s continue following the Assange story as a case in point. Sputnik had both a timeline of 4 or 5 events and a live stream of Assange supporters outside of the court. Their first report, replete with tweets is by Mohamed Elmaazi
Thank you Mohamed – The first reporter that actually works for Sputnik and was present at the court hearing. But he sure ‘aint Russian and so far, does not represent a Russian view. The report however is thorough, unless you count the speculative and meandering aspects. Does nobody have anything to say from Russia about this travesty of justice? Blind and boring repetitive historical aspects to fill the page with not a smidgen of actual personality, spice, or interest. There is not even a mention of the journalists that followed this case in its smallest detail and know it backward. Even the tweets are from non-entities. Did nobody in Russia follow this in order to quickly and accurately sum up the court proceedings on this morning of January 4th?

Sputnik oh Sputnik! Russia, where is your AMLO?

So TASS English has taken to summarizing major news in one page with 3 paragraph descriptions. This is what TASS has to say on their summary page: https://tass.com/world/1242191
No, not much; Not one word on journalistic freedoms or the real kernel of the Julian Assange case which is that the trial itself is a political show trial, the fact that this judge, in reality, found Assange guilty, and that the legal precedent set here will haunt every journalist across the world. There is no word that Julian Assange was released by the judge, but after US State stated their intention to appeal the ruling, Assange is again sleeping in jail tonight and his attorneys need to plead for bail this coming Wednesday – Bail for a man that has just been released?.

I guess we have to be somewhat thankful that the rest of this TASS English summary page contains some Russian news in English, all of the ‘3 paragraph’ nature.

The Vesti News channel that is now defunct was a good start with a wide line-up of Russian content. Nobody has picked it up again.  The material from the Valdai Club should be widely disseminated.

The treasure trove of WWII information now declassified is an opportunity to make a name for any investigative journalist that is not following the yellow path in journalism. Yet, short snippets of short fluff pieces are the norm, no matter what it is.  It takes the meaning right out of it and there is no context.  They need media figures such as Chris Hedges, Matt Taibbi, even a Pepe Escobar or a Ramin Mazaheri, to continually and in-depth tell the world what is happening in Russia, and mainly, what and who is up against Russia.

Do you know where I get my Russian hard news? I get Russian formal news by scouring the Twitter feeds of the various ambassadors, the Permanent Secretariat to the UN, the Russian Ministry of Foreign Affairs, the formal Kremlin site. This is because there is no hard Russian news in the English Russian news.

In fact, the Russian Ministry of Foreign affairs are better journalists than anything else in English coming out of Russia. Take a look at this. Mike Pompeo opened his mouth with Russia, Russia, Russia and how tough this US administration is on Russia. The Ministry of Foreign Affairs of Russia soon responded with Pompeo’s tweet superimposed on a gif of a painting of Napoleon’s retreat from Moscow. Now this makes a clear statement and is journalistic gold. 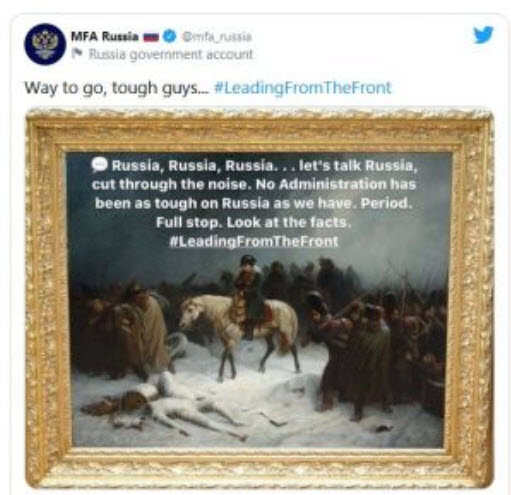 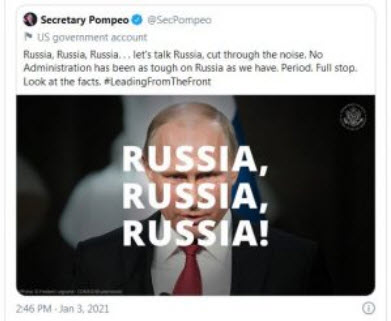 There is no shortage of hard news out of Russia. There is a sad shortage of journalists that are doing their jobs, or perhaps that are allowed to do their jobs and build their names. We may say that we know the name of the Editor of RT and Sputnik, but we do not know the journalists. Does this not seem strange to you as well, dear reader?