Story Code : 960293
Islam Times - Muhammad (PBUH) is a messenger that that is ruling on the hearts of the people.
"Muhammad is not the father of any one of your men, but the Messenger of God, and the Seal of the Prophets God has knowledge of everything." Holy Quran: Chapter 33 (Ahzab), verse 40.

Yes! Muhammad was the last messenger of God, one who lived among people like one of them such that his love penetrated to the heart of the people surrounding him.

On such a day, 1451 years ago as he came to the world in Mecca, Saudi Arabia, the congresses of the Palace of Kassra, the arrogant power of the time, cracked. And that was the beginning of the end of the arrogance's ruling.

The baby gifted to Amaneh and Abdullah was going to flourish and challenge the world's totalitarian emperors. But in an exclusively different way.

He conquered the hearts, not lands. By the time he burgeoned and became a young man, he would have been so loved and trusted by people, even the infidels, that people called him Muhammad the Trustee.

Then God the Almighty appointed him as His messenger, and Muhammad's mission got started.

He was the very Muhammad. Kind, Lovely, Humble. He called on people to refer to their creature, God the Almighty, compassionately guiding people to the light of purity and righteousness.

Muhammad the Messenger was kind to all.

Once, a Jew was used to bothering him. Whenever he saw Muhammad passing a place he threw ashes upon him. One day that Prophet Muhammad was passing from the Jew's house he was not bothered and did not find the man. He asked about the Jew and found out he got sick. Muhammad went to visit him! The Jew then was surprised was ashamed of himself. He was Jewish but turned Muslim.

Ignored people much bothered him, such that he said: "No prophet was bothered as the way I was bothered". But he did not get cold feet and practiced constant kindness.

To men, women, the elderly, the youth, children, and babies, Muhammad was kind; event to animals and event to earth.

That was Islam's mandate; Be kind to creatures! And resist the oppressors.

"Muhammad is the messenger of Allah and those who follow him are strong against Unbelievers, (but) compassionate amongst each other" (Holy Quran: Chapter 48: 29).

That was and is the approach of Messenger.

The glory of his humanitarian treatment, however, evoked the infidels' anger. They could not tolerate. They could not sit and see that a humble young man challenges their hegemony.

And they started to torture him and his followers.

But, Muhamad and his followers, Muslims, resisted. They endured all kinds of bothering, from tortures to sanctions.

He then left Mecca to Medina and the new Muslims then joined him there.

Muhammad established the Islamic government and stated the universal preach and inviting people to refer to their God, Allah the Almighty, penetrating into the hearts of people.

Today, after over 14 centuries, the 'real' Islam is sitting in people's hearts and attracting them.

And even after over 1,400 years, the very enemies are angry with Muhammad and his followers Muslims, resorting to doing anything so that the spread of light is stopped.

Look at what is going against Muslims in Palestine, Yemen, Nigeria, Iran, Syria, Afghanistan, and Iraq.

Even in the US, UK, France, Australia, New Zealand, the cradle of democracy!

Now the arrogant powers are seen Islam as their main enemy such that Noam Chomsky says they put Islam as one of their media filters in their propaganda against Islam and the Prophet.

They now 'misrepresent' the real Islam.

Nevertheless, they just imagine that they can stop Islam. It is as if they are trying to blow out the ever-lit flame of guidance.

Real Islam is opening its place in people's hearts.

Muhammad is not the father of any one of your men, but the Messenger of God, and the Seal of the Prophets God has knowledge of everything. 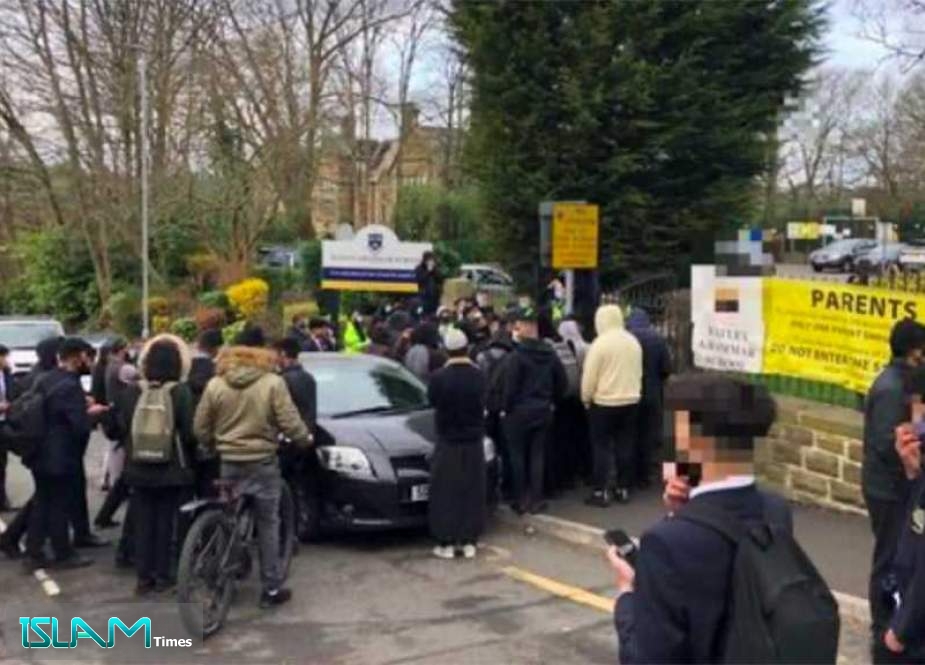 Prophet Muhammad Cartoon Triggers 2nd Day of Protests Outside UK School
Islam Times - Dozens of Muslim protesters are protesting for the second day outside a school in the north of England where a teacher has been suspended ...
Prophet Muhammad: A Kind Father Seeking Humanity's Prosperity