Story Code : 27
Now, the so-called ‘Nazi victims’ are celebrating the end of Jewish Hannukkah holidays by spilling more blood of innocent Muslims and Christians in Hamas-ruled Gazzah. They began carpet-bombing the tiny area housing 1.5 million Natives on Dec. 27, and their Zionazi assualt has entered its third day, today. So far more than 300 Palestinians are reported martyred and several hundreds more wounded.
“In the face of sufferings of Afro-Americans, Vietnamese and Palestinians, my mother’s credo always was: We are all holocaust victims - Dr. Norman G. Finkelstein, in his best-seller, The Holocaust Industry.

“If European Jews were truly desirous of a homeland, Madagascar would be an ideal place for them to relocate….It’s surely those who wish to force an imported regime upon the Arab population who are guilty of the spirit of aggression and domination….Despite the sympathy of world, the Zionists reject all schemes to resettle elsewhere, suchas Madagascar,” - Lord Moyne, who was later assassinated on November 6, 1944 by two members of Jewish terrorist group Stern Gang. The two Jew killers were hanged in Cairo on March 23, 1945.

The so-called “prophet” of Zionist movement, Theodor Herzl, though born to a Jewish mother, never claimed to be a practicing Jew and for his nationalist objectives - was willing to accept some land awarded to European Jews by the western powers, may it be Madagascar or Argentina, Uganda or Tripoli, Cyprus or Mozambique, or the Cong, according to Herzl’s Diaries.

“Leading the cry: We are God’s Chosen People, are the Zionist/Marxist (Ashkenazi) Jews, who for political purposes chose Judaism and who don’t have a drop of biblical Jewish blood in them (they’re Khazarian Turks). The Judeo-Christian ethic we hear so much about in America is a big joke - the result of an intense Zionist propaganda campaign,” - Jack Bernstein in his book The life of an American Jew in Racist Marxist Israel.

“In my opinion, it would be more reasonable to reach an agreement with the Arabs based on sharing life peacefully together, rather than to create a Jewish State with borders, an army and a project of temporal power, no matter how modest it is. I fear the internal damage that Judaism will sustain due to the development, in our ranks, of a narrow nationalism. We are not anymore the Jews of the Maccabees period. To become again a nation in the political sense of the world will be equivalent to turning away from the spiritualization of our community that we owe to the generosity of our prophets,” - Albert Einstein, 1938.

Early in 1935, a passenger ship bound for Haifa in Palestine left the German port of Bremerhaven. Its sterm bore the Hebrew letter for its name “Tel Aviv” while the Nazi swastika banner fluttered from the mast. And although the ship was Zionist-owned, its Captain was a National Socialist Party (NAZI) member. The mentioning of this old episode is to show that the ZionFacist, who spend tens of millions of dollars annually to brainwash the western generation about the evil history of Nazi-era and Hitler - were in fact themselves collaborated not only with Hitler’s Third Reich, but some 150,000 German-Jews were part of Nazi Army.

The French philosopher, Roger Garaudy, was fined US$40,000 by a French court on February 28, 1998 - for statements made in his 1996 book Les mythes foundateurs de la politique israelienne (The Founding Myths of Israeli Politics) under France’s Fabius Gayssot law of July 13, 1990, which makes it a crime to contest the so-called ‘crimes against humanity’ as defined by the Nuremberg International Military Tribunal of 1945-46. This law conceived by a French Jew MP, Laurent Fabius, is basically applies only to wartime treatment of Jews by the Nazis.

Now, the so-called ‘Nazi victims’ are celebrating the end of Jewish Hannukkah holidays by spilling more blood of innocent Muslims and Christians in Hamas-ruled Gazzah. They began carpet-bombing the tiny area housing 1.5 million Natives on Dec. 27, and their Zionazi assualt has entered its third day, today. So far more than 300 Palestinians are reported martyred and several hundreds more wounded. The Zionist-regimes in the US and Britain has used their veto power against UN Security Council’s condemnation of Israeli invasion of Gazzah. Iran’s Spiritual Leader, Ayatullah Khameini, threw his support behimd Hamas government and said that all the victims of Israeli thugs are “martyrs”. Israel’s longest Muslim ally, the Kemalist Turkey’s prime minister Recep Tayyip Erdogan condemned the Zionist regime of using “disproportionate force”.

As expected, the majority of western puppet regimes in the Muslim world kept their mouths shut in fear of USrael backlash - hundreds of thousands protestors hit the streets in Iraq, Jordan, Egypt, Lebanon, Yemen, Syria, Islamabad, and Tehran - burning flags of Usrael and its chief ally, United States - accusing both governments in engaging in international terrorism.

“Driven by a crazy warmongering prejudiced god, who elevates one group of people over the rest of his creation, and who orders his chosen people to perpetrate a bloody genocidal cleansing of his promised land in order to build him a mundane house to live in, Israeli politicians are ready to do anything in order to accomplish their deluded dream of a pure Jewish Greater Israel, from Nile to Euphrates, without any Christian or Muslim Goyims.

The behavior of these many Jewish fanatic groups are considered by any official laws and standards of any country in the world as terrorism. For the last sixty years the Palestinians have been faced with organized Jewish terror supported by major political and religious parties in the Israeli parliament. This is a state sponsored terror. It is a government policy that every Israeli leader supports and calls for. Their real intentions and policies become so transparent and apparent during election time, when all of them call for the expulsion of Palestinians. Just listen to what the Israeli Foreign Minister and leader of the ruling Kadima party, Tzipi Livni, addressing a high school students in Tel Aviv and promising that she would “encourage” those they call Israeli Arabs to move out of Israel to the state of Palestine once it is established.

Israel is a terrorist state. Many people recognize it as such. This is apparent in the international solidarity the Palestinians are receiving from all over the world. The international political bodies have yet to acknowledge this fact, and if they don’t one wonder what kind of ethics and morality that drives their sense of justice and freedom they claim they are fighting for. “
Source : rehmat1.wordpress.com
Share It :
Related Stories 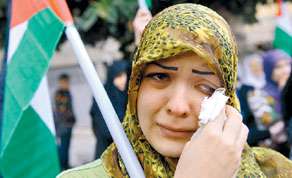 Israel's Free Ride Ends
As Israel pulverises Gaza, questions and doubts about Israeli policy are becoming more prominent in the American media
Civilians Are Paying the Price in Gaza’
The Holocaust
Leaders Lie, Civilians Die, and Lessons of History are Ignored
The Massacring of Palestinian Children by Zionist Troops
Israel launches attack on Gaza, kills 230
Refugees: the Principle Issue of Palestine
Pink Floyd: Take Down the Wall