Occupy Melbourne protesters have been ordered to leave Treasury Gardens

Story Code : 114383
Islam Times - Police say three people have been arrested after officers moved in, with one man tying himself to a tent, Amelia Harris reports.
The unrest came after Melbourne City Council officers told protesters to pack up their tents or face having them confiscated.

The order was issued about 7am this morning, just minutes after six police officers arrived. About 12 tents were set up in the park just near 1 Treasury Place.

"Nobody is evicting anybody today," he said.
"Today we are going to require that goods are removed from the gardens."

One protester vowed to defend his property when a council officer told him to pack up his black tent.
The protester, who would not tell council officers his name, said taking the tent would be theft.

But Occupy Melbourne spokesman Will Wallace said he didn't think the order would lead to violence like in City Square last month.

“We will defend what we believe is being unlawfully targeted but we are not going to cause a ruckus” Mr Wallace said.
Another protester Zea Littlejohn said the group needed the structures to function, but said she would not oppose police.
She said the group had taken in and fed homeless people each night.

Protester Manu, who wouldn't give his surname, said a small contingent would stay to defend the camp while others would take their belongings and leave.

“There is a crew who have agreed to protect the embassy so it looks like we are going to see some television today” Manu said.
Another protester said council officers had been chasing the group "all over town".
Share It :
Related Stories 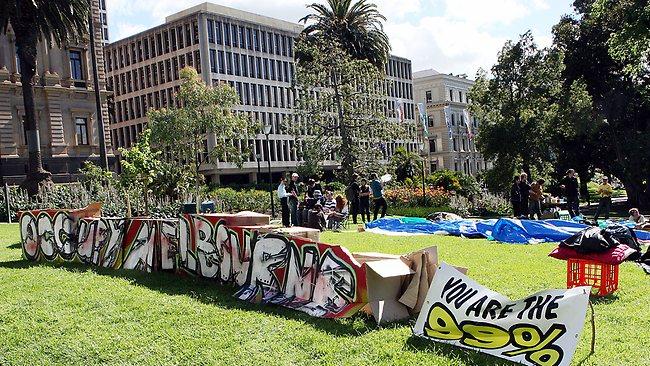