Story Code : 222331
Islam Times - The Secretary-General of the Bahraini opposition organization “Al Wefaq”, Sheikh Ali Salman, ruled out the possibility of dismissing the Prime Minister Khalifa bin Salman Al Khalifa, in the near time. He called for a British intervention to end the crisis in Bahrain.
The Sheikh Ali Salman said in an interview with BBC channel, “we have distant hopes in the coming weeks through open communication between Crown Prince and Al Wefaq Organizations.” He pointed out that "in case these attempts failed, I would like to see Britain intervene to mediate." He requested that the British government should mediate between the opposition and the ruling family in Bahrain if the crisis continues in the country.

Sheikh Ali Salman said that Western countries such as Britain and the United States need to make more of an effort to prevent Bahrain from falling prey to extremism by the conflicting parties.

He added: "I think we need more from Britain and the United States to practically achieve the change toward democracy without any delay. This will benefit everyone, Bahrainis, Americans and the British”, stressing that "If Britain did not intervene, the alternative would be terrible.”

The Secretary-General added that Al Wefaq is a major Bahraini opposition organization, “We cannot have our militants on both sides working and destroying this country."
Share It :
Related Stories 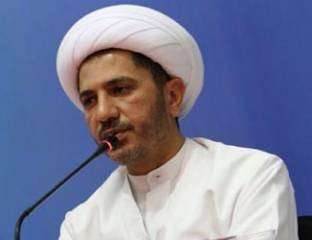 Secretary General of al-Wefaq - the Revolution does not belong to one faction
Islam Times - Sheikh Ali Salman, the Secretary General of al-Wefaq - Bahrain biggest party of the opposition - said at a meeting on Wednesday that ...
Secretary-General of al-Wefaq confirms that the people have won the battle and their patience will achieve their aspirations
Secretary General of al-Wefaq makes an appeal to the international community
Secretary General Guterres says de-escalation in Persian Gulf 'absolutely essential'
Secretary-General of reconciliation: impunity reigns over Bahrain
Secretary General of the Unionist Rally - Victory is only a matter of time -
Secretary-general of PA cabinet resigns
Secretary-General of the Islamic National Accord Association: major Marches after the month of Ramadan
Comment
Global Number of Coronavirus Cases Smashes Past 720,000
Iran’s MoD Mass Produces Test Kit Able to Detect COVID-19 in 3 Hours with 98% Accuracy
Will The UAE Survive The Coronavirus Pandemic Crisis?
Activist Wants Pressures on Israeli Regime over Plight of Palestinian Prisoners amid Pandemic
Oil Prices Fell with Brent Crude Prices Hits Lowest since 2002
US Waging ’Medical Terror’ on Iranians amid Coronavirus Pandemic: Zarif
US Will Not Pay For Security of British Prince Harry, Meghan Markle in US: Trump
Israeli PM’s Adviser Tested Positive For Coronavirus
German State Minister Commits Suicide over Coronavirus Concerns
Turkish Occupation and its Mercenary Again Cut Off Water from Hasaka City
Queen Elizabeth Tests Positive for Coronavirus
COVID-19 – The Fight for a Cure: One Gigantic Western Pharma Rip-Off
UN Chief Calls for Ceasefire as Yemen Braces for Possible COVID-19 Outbreak
Russia Has Requested US to Lift Iran Sanctions As Soon As Possible
US Has Taken Several Iranian Scientists Hostage: Zarif
Maduro Rips US over ‘Narco-Terrorism’ Charge
The Working Class Should be Hailed as Covid-19 Heroes for Enabling All Our Comfy Quarantines
Virus Price for NATO Racket
Thanking Coronavirus Frontline Workers