US: Chinese actions in South China Sea out of step with intl. law

Story Code : 463970
Islam Times - The US military has called on China to immediately stop developing islands in the South China Sea, accusing Beijing of acting out of step with international law.
US Defense Secretary Ashton Carter told a security conference in Singapore on Saturday that "with its actions in the South China Sea, China is out of step with both the international rules and norms."

The annual Shangri-La Dialogue was attended by defense ministers and high-ranking military officials from China, Europe and other Asia-Pacific countries.

"First, we want a peaceful resolution of all disputes. To that end, there should be an immediate and lasting halt to land reclamation by all claimants," Carter said.

"We also oppose any further militarization of disputed features," he said.

Carter reiterated that the US will not stop patrolling international waters and airspace in the Asia-Pacific region.

"There should be no mistake: the United States will fly, sail, and operate wherever international law allows, as US forces do all around the world," he said.

Washington accuses Beijing of undergoing a massive “land reclamation” program in the Spratly archipelago of the South China Sea, and says China’s territorial claims of the man-made islands could further militarize the region.

The United States says its surveillance of  China’s artificial islands indicates that Beijing has positioned weaponry on one of the islands it has built in the South China Sea.

Citing unnamed US officials, The Wall Street Journal reported on Thursday that the surveillance imagery detected two Chinese motorized artillery pieces on one of the islands developed almost one month ago.

Beijing says it is determined to safeguard its sovereignty and territorial integrity in the South China Sea.

China’s territorial claims in the region overlap with those of Brunei, Malaysia, Vietnam and Taiwan, and more specifically the Philippines.

The Pentagon chief on Saturday acknowledged that other countries have also built outposts in the South China Sea, including Vietnam with 48, the Philippines with eight, Malaysia with five and Taiwan with one.

"Yet, one country has gone much farther and much faster than any other,” he said.

"And that's China. China has reclaimed over 2,000 acres, more than all other claimants combined and more than in the entire history of the region. And China did so in only the last 18 months," Carter added.

"It is unclear how much farther China will go. That is why this stretch of water has become the source of tension in the region," he continued.

A Chinese state-owned newspaper has warned that “a US-China war is inevitable in the South China Sea,” unless Washington stops demanding Beijing halt its construction projects there.

“The intensity of the conflict will be higher than what people usually think of as ‘friction’,” The Global Times, an influential newspaper owned by the ruling Communist Party’s official newspaper The People’s Daily, said in an editorial Monday.

According to analysts, the United States is ratcheting up tensions with China and Russia in order to start a new war.

Meanwhile, American journalist Don DeBar said on Friday that the United States is taking a very "aggressive posture" against both China and Russia in an attempt to weaken the growing alliance between the two powers.
Share It :
Related Stories 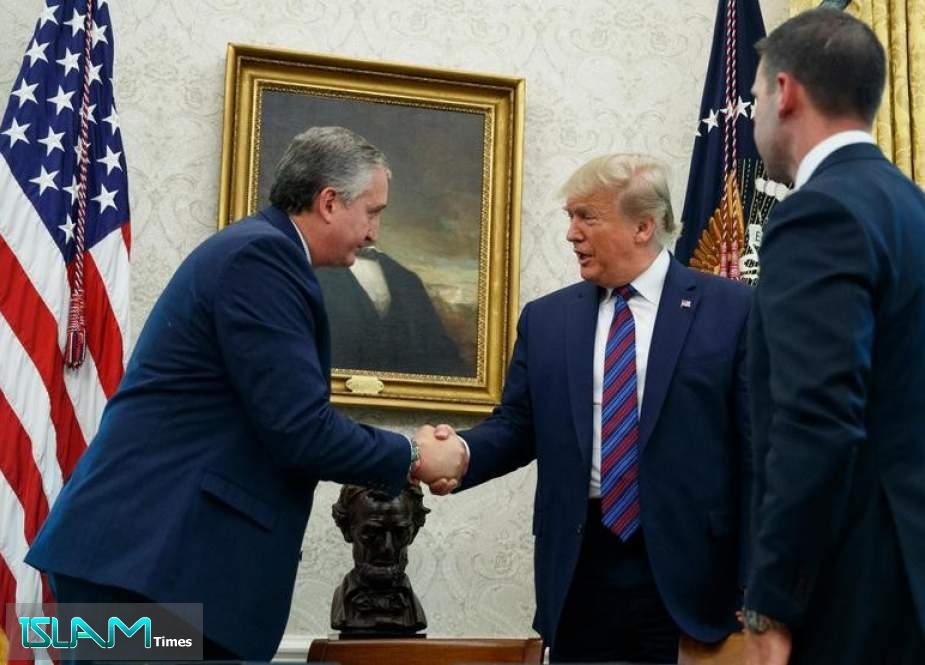 US and Guatemala sign asylum deal that critics call cruel, unlawful
Islam Times - The United States and Guatemala have signed a controversial asylum agreement that will force any migrants traveling through the Central ...
US female landlord who refused to rent to Muslim men settles lawsuit
Muslims should be barred from working in Ramadan: German AfD lawmaker
US Supreme Court rules on controversial Arizona immigration law
US Attacks on Syrian Forces in Al-Tanf a Blatant International Law Breach
US could have prevented Sheikh Nimr’s execution: International lawyer
US wants to cover up trail of drone blood
Russian inter-meddling led to Charlottesville attack, US lawmaker cites FBI
Comment
A Just Peace