Sayyed Nasrallah Confident of Victory: I Have Big Hope that We Will Pray in Al-Quds!

Story Code : 804759
Islam Times - Stressing that the nation is witnessing the era of victories, Hezbollah Secretary General Sayyed Hasan Nasrallah voiced confidence that the resistance will deal the Zionist entity a terrible defeat in the future war, voicing big hope that he will be one of those who will pray in Al-Quds.
In an exclusive interview with Al-Manar, Sayyed Nasrallah called on Israeli officials no to boast over their saying that the Zionist forces will “return Lebanon to Stone Age”.

On the thirteenth anniversary of July war in 2006, Sayyed Nasrallah stressed that the resistance today is more powerful than before; presenting its developed capabilities which he said will bring the Zionist entity to the “verge of vanishing”.

Reiterating his well-known saying that ‘Israel’ is weaker than a spider web, Sayyed Nasrallah said that the Israeli enemy has failed to rebuild trust in its military capabilities, stressing that the Israeli commanders fear the resistance and don’t dare to start a war with Lebanon.

In a move that raised eyebrows upon the Zionist entity, Sayyed Nasrallah presented a map of occupied Palestine. The map showed dozens of Israeli targets to be hit by Hezbollah in any future war.

His eminence stressed that the Israeli coast which includes many strategic sites is under Hezbollah’s fire.

“Hezbollah at minimum is capable of inflicting huge destruction upon the Zionist entity.”

Sayyed Nasrallah meanwhile, said that Hezbollah fighters have become expert and well-prepared for the invasion of Galilee, noting that the resistance leadership has prepared several scenarios for such move.

On the other hand, he described as failed the summit which took place in Bahrain last month, stressing that the US President Donald Trump’s so-called ‘deal of the century’ is doomed to failure.

In this context, Sayyed Nasrallah noted that the Palestinian refugees reject to cede their land or to be naturalized.

Concerning the Lebanese borders demarcation, Sayyed Nasrallah stressed that the issue is the responsibility of the Lebanese state, voicing support to the government in such battle with the Zionist entity.

His eminence described what happened in Syria up till now as a great victory, noting that the Syrian state is recovering, but noting that there are other issues that are still not solved.

On Hezbollah presence in Syria, Sayyed Nasrallah said that the resistance movement has reduced its troop presence, noting that redeployment can be made when needed.

Hezbollah S.G. ruled out confrontation between Iran and the US, noting that Washington knows very well that the war with the Islamic Republic costs highly.

Sayyed Nasrallah also warned that such a war between Iran and the US will have dangerous repercussion on the entire region, including Saudi Arabia, UAE and the Zionist entity.

His eminence meanwhile, revealed that Ansarullah revolutionary movement processes missiles that can reach the entire Saudi and Emirati territories, but noted that the Yemeni group only wants the war to stop.

On the Lebanese local developments, Sayyed Nasrallah reiterated Hezbollah’s call for calm, referring to the shooting which targeted the convoy of a Lebanese minister in Mount Lebanon earlier this month.

Sayyed Nasrallah also said that Hezbollah will go ahead with counter-corruption campaign.

His eminence stressed meanwhile, that in face of US sanctions and blacklisting of Hezbollah lawmakers and officials, the resistance’s only choice is steadfastness.

Sayyed Nasrallah started the interview by congratulating al those who contributed to the divine victory “on top of which are the martyrs’ families, the injured and all the elements of the golden tripartite: the army, the resistance and the people.”

His eminence said that deterrence equations set by the resistance with the Zionist entity since July war in 2006 have been consolidated, stressing that the “security which we witness in Lebanon nowadays is made by the Lebanese people themselves, thanks to their unity.”

Sayyed Nasrallah said that throughout 13 years and despite all pressures on the resistance, Hezbollah managed to develop its capabilities in all means.

“We have game-changing offensive weapons, along with human capabilities represented by Radwan Force and Al-Abbas Brigades (elite forces).”

“Our weapons have been developed in both quality and quantity, we have precision missiles and drones,” Sayyed Nasrallah said, stressing that Israeli commanders fear such capabilities.

The resistance leader did not give a clear answer if Hezbollah has anti-aircraft missiles.

“Who said we have (such weapon) and who said we don’t have, in this regard we adopt policy based on constructive ambiguity.”

Talking about the Israeli weak points, Sayyed Nasrallah said that Israeli commanders failed to find solution to the issue of its home front’s vulnerability.

All the Israeli attempts to rebuild trust in the Israeli home front have failed, Sayed Nasrallah said, noting that the Israeli military had staged in the latest years so many drill.

“But the Israeli enemy acknowledges that its human capabilities have deteriorated, and all know that the Israeli air force can’t make it alone in any war.”

His eminence referred to the Israeli threat of ‘returning Lebanon to the Stone Age’.

“I advise Israeli commanders to avoid war rhetoric since such rhetoric underestimates Lebanon.”

In this context, Sayyed Nasrallah reiterated his well-known saying which he announced in the southern town of Bint Jbeil in 2000: ‘Israel’ is weaker than a spider web.’

Answering a question about the Israeli targets which would be hit in any coming war, Sayyed Nasrallah held a map showing the occupied Palestinian territories.

“The entire ‘Israeli’ north is under the resistance’s fire and the most strategic area is the ‘Israeli’ coast,” he said.

“The 70‐km long ‘Israeli’ coast starting from Netanya and ending by Ashdod is under the resistance fire, this area includes the most strategic Israeli sites (Ben Gurion airport, arms depots, petrochemical plants, Tel Aviv and Ashdod ports),” he elaborated.

In this context, Sayyed Nasrallah affirmed that the Israeli enemy today doesn’t dare to carry out any strike against Lebanon

“Hezbollah at minimum is capable to inflict huge destruction on the Zionist entity. Our fighters have become expert and well-prepared for the invasion of Galilee, we have several scenarios in this regards.

On the other hand Sayyed Nasrallah ruled out a war with the Zionist entity in the near future: “Such war will put the Israelis on the verge of vanishing.”

Asked if he is confident of the victory in any upcoming war with the Zionist entity, Sayyed Nasrallah said: “I’m certain of the victory, God is with us.”

Answering this question Sayyed Nasrallah said: “The ages are in the hand of Allah, but based on logic, I have big hope that we will pray in Al-Quds.” 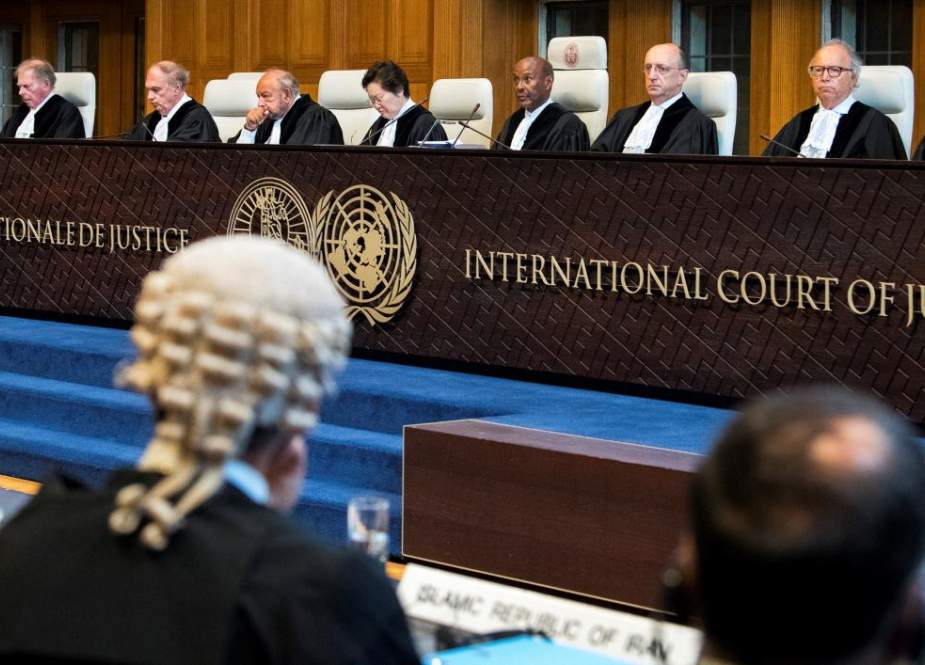 Palestine files complaint with ICJ against US relocation of its embassy to al-Quds
Islam Times - Palestine has filed an official complaint with the International Court of Justice (ICJ) against the United States’ relocation of its ...
Palestinian Churches Slams Israel Regime’s Systematic Attempt to Judaize Al-Quds
Israel digs 20 tunnels under Al-Aqsa Mosque in Jerusalem
PA chief says millions of Palestinian ‘fighters’ will enter Jerusalem al-Quds
Potentials, Challenges ahead of Muslims’ Reaction to US Embassy Move to Al-Quds
Palestine urges ICC probe into Israeli threats to demolish homes in East al-Quds
Protesters in Jordan, Turkey, Indonesia rally against US embassy move to al-Quds
Netanyahu, in Washington, to invite Trump to US embassy opening in Jerusalem al-Quds
Comment
U.S. Death March
Beijing Says China Has No Interest in US Internal Affairs
Trump Plans to Invite Putin to G7 Summit in US
Netanyahu Blames Washington For Stalled West Bank Annexation
Russia’s Health Ministry Approved World’s First Covid-19 Vaccine
Convoy Carrying Military Equipment for US Attacked on Iraq-Kuwait Border
Russia Calls on US to Stop Pumping up ME with Weapons
With an Eye on Balkanization, Israel throws Support Behind Separatist Militants in Southern Yemen
Snapdragon Processor Flaw Puts 40% of Phones at Risk of Hack
Trump Rushed from Briefing Room After Shooting Unfolds Outside White House
Trump ‘is a first-degree mass murderer’ and ‘the most successful bio-terrorist’ in history: Famed psychologist
Russia Says Oil Deal Between US Firm, SDF Shows Washington’s Continued Violation of Syria’s Sovereignty
Fire Hits High-speed Rail Station in Saudi Arabia’s Jeddah
Sayyed Nasrallah: Impartial Probe Necessary into Beirut Blast
Stars Without Borders