Omar: US must reconsider billions of dollars of aid to Israel

Story Code : 811821
Islam Times - Democratic Representative Ilhan Omar has said that billions of dollars of US aid to Israel should be tied to its treatment of Palestinians, urging Washington to reconsider the funds to the Tel Aviv regime which is engaged in oppression of the Palestinian people.
Omar on Monday said that Congress should reconsider the annual US aid allocated to Israel, after the regime banned Muslim Congresswomen Ilhan Omar and Rashida Tlaib from travelling to Jerusalem al-Quds and the occupied West Bank.

"We give Israel more than $3 [billion] in aid every year. This is predicated on them being an important ally in the region and the only democracy in the Middle East. But denying a visit to duly elected members of Congress is not consistent with being an ally, and denying millions of people freedom of movement or expression or self-determination is not consistent with being a democracy," Omar said at the press conference in St. Paul, Minn.

Omar, a member of the House Foreign Affairs Committee, also stated that US aid should be contingent upon Israel's activity in Palestine.

"We must be asking, as Israel's ally, that [Israeli Prime Minister Benjamin] Netanyahu’s government stop the expansion of settlements on Palestinian lands and ensure full rights for Palestinians if we are to give them aid," Omar said.

The United States and Israel signed an agreement in September 2016 to give Israel $38 billion in military assistance over the next decade, the largest such aid package in US history.

Israel announced on Thursday that it would prevent a visit by Tlaib and Omar, both Democratic members of the US House of Representatives, over their criticism of Israel.

The decision by Israel appears to be an unprecedented move against American members of Congress. Even AIPAC, a pro-Israel lobbying group in Washington, criticized Israel for barring the pair from traveling there.

Omar on Monday expressed gratitude for the "solidarity" from other Democrats who have expressed outrage at Israel's decision to ban her and Tlaib. Representatives Alexandria Ocasio-Cortez (D-N.Y.) and Mark Pocan (D-Wis.) have called for refraining from visiting Israel until all members of Congress can go.

But Omar urged fellow lawmakers to visit Israel to conduct congressional oversight to see what happens with “millions of dollars” the US sends to Israel in aid.

"It is my belief that, as legislators, we have an obligation to see the reality there for ourselves. We have a responsibility to conduct oversight over our government's foreign policy and what happens with the millions of dollars we send in aid. So I would encourage my colleagues to visit," Omar said.
Share It :
Related Stories 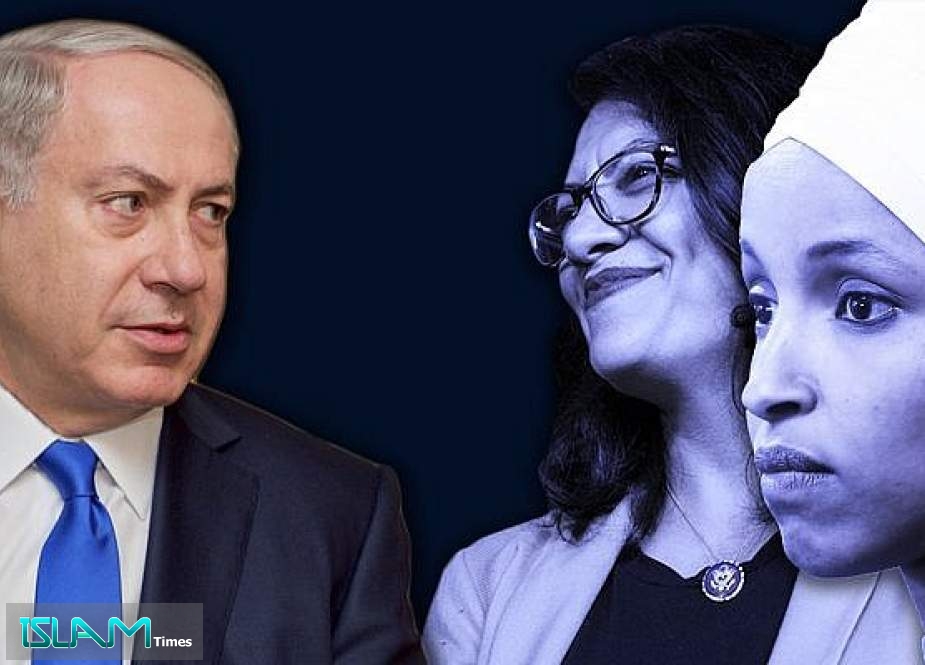 Omar, Tlaib, and the United States of Israel
Islam Times - I’m trying to remember when Israel wasn’t the fifty-first state. It receives my tax money and a blank check by the United States government ...
Omarosa offered $15,000 a month in exchange for silence after leaving White House
Omar Abdul Rahman supporters call for release of Egyptian cleric
Omar Suleiman is trying to improve his position in Egypt and fight to stay in presidential race
‘Omar Suleiman rightfully disqualified to run as president’
Israelis and Americans were pleased when Omar Sulaiman was appointed an adviser of Prince Nayef
Ilhan Omar Signs AIPAC Letter to Extend Iran Sanctions
Ilhan Omar is ‘disrespectful’ to US and ‘disrespectful’ to Israel: Trump
Comment
UK Says Strongly Supports JCPOA
First US Space Force Squadron Lands in the Gulf
Woman Arrested for Allegedly Sending Trump Poisoned Letter
Lebanese President Calls for Refugee Return on 75th UN Anniversary
Biden: Trump’s “Lies, Incompetence” Lead to Gravest Losses in US History
Russia Says ‘Not Afraid of US Sanctions’ over Arms Trade with Iran
Palestinians Fear Cost Of Arab States’ Normalization with ‘Israel’
PA Quits Arab League Chairmanship: Unhonored to See Arab States Rush to Normalize with the Occupation
Britons to Return to Home Working, New Limitations amid COVID-19 Surge
UN General Assembly Holds Virtual Summit for World in Crisis
Iraq’s Sadr: Israel Would Mark Own Ending by Opening Embassy in Baghdad
Possible Targets for Taking Revenge for Gen. Soleimani
Why Is Iraq’s Al-Kadhimi Pushing To Cozy Up To Kuwait?
2,000 Days Since It Began, the War in Yemen Is Poised To Turn Even More Deadly
SA Minister: US Report of Iran’s Assassination Plot ‘Bizarre’
Five Nations Are Weighing Normalized Ties to ‘Israel’: Trump Aide
EU Parliament Urges Arms Embargo on Saudi Arabia
Over 30 Taliban Fighters Killed in Afghan Airstrikes: Govt.
How US Takes Advantage of Terrorism for Purpose of Its Hegemony!
Rights Groups: UAE Hires Thousands of Mercenaries to Carry Out Assassinations in S Yemen
Featured Stories