Somali Police: Five Killed as a Result of a Terrorist Attack on a Hotel in Mogadishu

Story Code : 832063
Islam Times - Somali police announced on Wednesday that five people, three civilians and two policemen, were killed in the attack on Tuesday night by five terrorists on a hotel in the capital Mogadishu.
"Our security forces have ended the terrorist attack on the Ciel Hotel," the police said in a statement. "The number of confirmed dead is five, they are two members of the security forces and three civilians, in addition to 11 who were slightly injured."

The statement added that the five attackers belonged to Al-Shabaab were killed in the attack.
Share It :
Related Stories 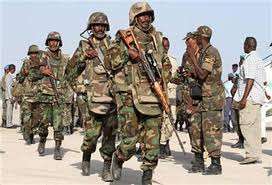 AMISOM police starts training 160 Somali police forces
Islam Times - The African Union Mission in Somalia Police component has officially began training security officers from the Somali police force. The two-week training course is being ...
Comment
US ‘Deal of Century’ Plots to Sow Discord Among Muslims: Larijani
US Assassination of Gen. Soleimani Has Made the Region "Safer": Saudi FM
Tunisian Parliament Examines Military Intervention in Libya
Zarif Affirms Iran's Support for the Peace Process in Afghanistan
Sayyed Hassan Nasrallah Meets with Martyr Soleimani’s Daughter
Bolton Writes in his Book that Trump was Doing Favors for Autocratic Leaders
All US Weapon Deliveries to Iraq Have Been Suspended
Zarif Describes Trump’s Plan on Palestine as “Delusional, Dead on Arrival”
Trump Claims his Plan Will be ‘Very Good’ for Palestinians
IRGC Chief Warned that Enemies Will Regret Any Military Action against Iran
Migrants Enter Mexico Under Watch of Security Forces

All US Weapon Deliveries to Iraq Have Been Suspended

We Should Not Let Trump Succeed in Damaging National Unity: Rouhani