Story Code : 840673
Islam Times - Former Saudi justice minister, Sheikh Muhammad bin Abdul Karim bin Abdulaziz al-Issa, has visited the former Nazi concentration camp Auschwitz in Poland along with a Jewish group, days before Israeli regime is going to commemorate the Holocaust in the occupied al-Quds (Jerusalem).
On Thursday, Issa, the secretary general of the Mecca-based Muslim World League (MWL), led a delegation of 62 Muslims, including 25 prominent religious scholars, from some 28 countries during the visit. A delegation of American Jewish Committee (AJC) officials was in the company as well.

The CEO of the AJC, David Harris, described Issa’s visit to Auschwitz as highly significant, claiming that the trip represented “the most senior delegation" of Muslim scholars to visit Auschwitz ever.

The visit came less than two years after Issa, who is considered to be a close associate of Saudi Crown Prince Mohammed bin Salman, visited the US Holocaust Memorial Museum in Washington, DC, in May 2018.

In May 2019, AJC and MWL signed a memorandum of understanding, agreeing to take part in a trip to Auschwitz together this year.

Issa has also accepted an invitation from Harris to address the AJC Global Forum in Berlin in June 2020. Harris, in turn, will lead an AJC delegation to Saudi Arabia.

The senior Saudi cleric’s visit to Auschwitz comes as Saudi Arabia is trying to bring out in the open its years-long clandestine relations with the Israeli regime.

Back on July 22, 2019, angry Palestinians jeered and cursed a Saudi blogger known to be a huge fan of establishing formal ties between Israel and Saudi Arabia.

One video clip posted on Twitter at the time showed Mohammed Saud being cursed and jeered as he was visiting the al-Aqsa Mosque compound in the Old City of Jerusalem al-Quds .

He was part of a six-person media delegation from the Arab world, including representatives from Jordan, who were in the occupied Palestinian territories at the invitation of the Israeli foreign ministry.

Palestinians protesting his visit called him a “traitor”, “animal” and “Zionist trash”, and also told him to “go to a synagogue” instead of praying at a mosque.

Another video clip showed plastic chairs and sticks being thrown at him as he walked in the market in the Old City.

Akhbar noted that Abbas had turned down the offer, saying supporting the deal would be “the end of his political life.”

Earlier last year, delegates from Saudi Arabia, the United Arab Emirates (UAE) and Egypt at a meeting of Arab states reportedly opposed bids condemning the normalization of relations with the Israeli regime.

Russia's RT Arabic television news network reported in March 2019 that Abdullah ibn Muhammad Al ash-Sheikh, the speaker of Saudi Arabia's Consultative Assembly, together with his Emirati and Egyptian counterparts had opposed a paragraph in the final communiqué of the 29th Conference of the Arab Inter-Parliamentary Union in the Jordanian capital city of Amman, which demanded an end to efforts aimed at normalizing ties with Israel and condemned all forms of rapprochement with the occupying regime.
Share It :
Related Stories 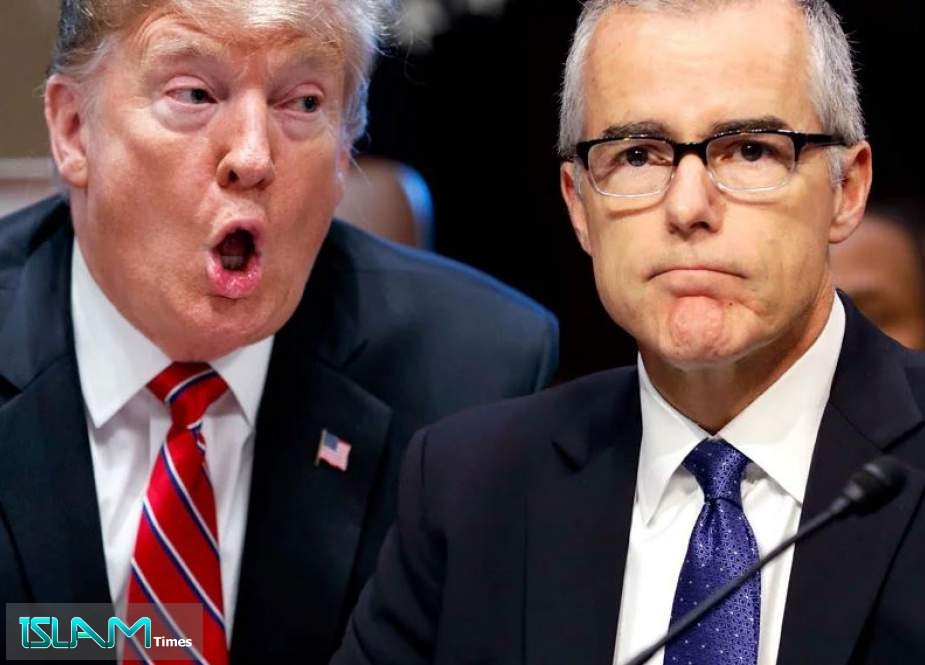 Ex-FBI Deputy McCabe: 'I Don't Think I Will Ever Be Free of This President, His Maniacal Rage'
Islam Times - Former FBI Deputy Director Andrew McCabe said Friday that he doesn't think he will "ever be ...
Exclusive Interview with General Suleimani during ISIL Fight in Iraq

US Imposes Sanctions on Senior Commander of Iraq’s Popular Forces

33 Turkish Servicemen Have Been Killed by Airstrike in Syria's Idlib

Iran Decries US Push for Violation of UNSC Resolution

Diplomat Slams Shameful Remarks of Dubowitz about Coronavirus in Iran