Story Code : 882937
Islam Times - A British soldier was arrested by the Royal Military Police for publicly protesting against the United Kingdom's arms sales to Saudi Arabia.
Ahmed al-Batati, a 21-year-old lance corporal from Sheffield, condemned the British government and said it had "blood on its hands" for its continued support of the kingdom, Middle East Eye reported.

Images posted online showed Batati, who was born in Yemen, standing in Whitehall in his military uniform with a placard that said he "refused" to continue serving in the UK military until it ended all arms sales to Riyadh.

Insignia on his uniform also indicated that Batati belonged to the 14 Signal Regiment (Electronic Warfare), which provides intelligence to the UK army's land forces, according to its website.

Footage posted by the group Stand for Justice, which Batati helped set up, shows him being arrested and escorted away by three officers from the Royal Military Police.

Batati reportedly stood outside for nine-and-a-half hours, blowing his whistle every 10 minutes to symbolically mark how often a child dies in Yemen.

Batati confirmed that he had been released from the station and passed back to his unit.

"I don't know myself yet what the army intends to do, but I've been released from the station and passed on to my unit," Batati said.

Joe Glenton, a British army veteran who was sent to prison for refusing to continue his military service in Afghanistan, said Batati may be facing jail time for his protest.

"Its very hard to say at this stage what could happen to this young man, but he has broken some big rules by protesting in uniform," Glenton said.

"Theoretically, the military is meant to be apolitical and there are certain things you cannot do in uniform that connect your politics to the military, like protesting or canvassing for a political party."

Speaking about the motivations behind his protest, Batati said that he made his decision based on the "lack of consideration" the UK government shows "towards the people of Yemen".

"We are soldiers that serve the government, so why should I continue my service to a government that continues to prioritise money over the victims of Yemen," said Batati.

"My message is clear: I refuse to serve them until they make the right decisions to end the unlawful arms trade with Saudi Arabia. I'm a man of sense, so I don't expect or think that the government will do the right thing."

He added, "Going into this, I didn't have any expectations. Even if this video didn't go viral, at least I can say I did the right thing and did my part."

The video posted before his protest shows Batati discussing the motivations, saying that he "could have easily fell victim to one of those air strikes or died of hunger" if his family had stayed in Yemen.

"I joined the army in 2017 and took an oath to protect and serve the country, not to be part of a corrupt government that continues to arm and support terrorism," Batati says in the video.

"I'd rather sleep peacefully in a cell than stay silent for a paycheck."

For the last five years, Saudi Arabia has led a military coalition against Yemen. Coalition airstrikes have been responsible for over 11,700 civilian deaths in the conflict, according to data collated by the independent Armed Conflict Location and Event Data Project.

In July, the UK government resumed licensing new arms sales to Saudi Arabia, claiming there was "not a clear risk" of British weapons being used for war crimes.

Riyadh remains the biggest customer of British weapons and has purchased Typhoon and Tornado fighter jets as well as precision-guided bombs.

Data collated by the Campaign Against the Arms Trade indicate that the UK has licensed £6.3bn worth of arms to Saudi Arabia in the first four years of Riyadh's military aggression against Yemen.
Share It :
Related Stories 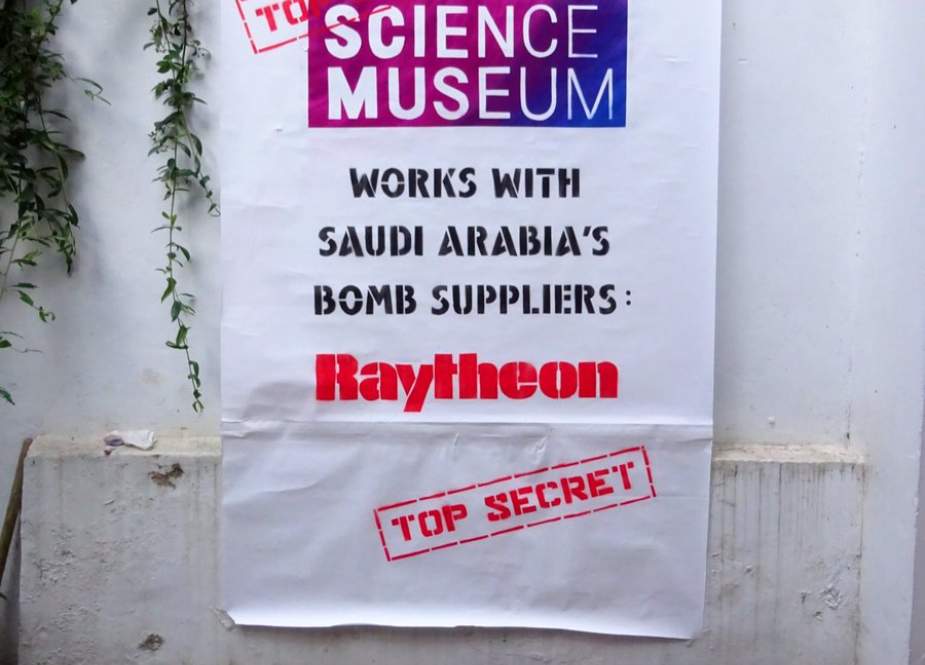 Artists pull work from UK museum over Saudi arms sales
Islam Times - An arts collective has withdrawn its work from a British museum after discovering its ties to the American arms manufacturer Raytheon, a company that continues to sells arms ...
UK lashes out at Germany over Saudi arms sales ban
Britain Has Blood on Its Hands over Yemen: Iran
Comment
Pakistan Rules Out Possibility of Housing US Troops on Its Bases After Withdrawal from Afghanistan
Biden Signs Executive Order to Strengthen US Cybersecurity Defenses After Colonial Pipeline Hack
Hamas Yet to Unveil Main Military Assets: Deputy Commander
US Senators Warn against Iran Trade if Sanctions Removed
US Military Transports Weapons, Logistic Material from Iraq to Syria’s Hasakah: SANA
Imran Khan Expresses Solidarity with Palestinians
'Virus' of Islamophobia Turning Europe into ‘Open-Air Prison’ for Muslims: Erdogan
Qassam Brigades to ‘Israel’: No Redlines, No Rules of Engagement When it Comes to Protecting Al-Aqsa, Our People
US Deploys F-18 Fighter Jets to Saudi Arabia as Tensions Escalate in West Asia
Palestinian Resistance Escalates Confrontation with Enemy: All Israeli Airports Are Now Under Fire