Sayyed Nasrallah: The Axis of Resistance Shapes Region’s Future, ‘Israeli’s To be Expelled By Force

Story Code : 930993
Islam Times - Hezbollah Secretary General His Eminence Sayyed Hassan Nasrallah delivered a speech in an event held marking the International al-Quds Day.
The event, dubbed “The United Platform”, was held virtually on Wednesday afternoon, in which the Islamic Resistance leader emphasized that the weeks-old al-Quds uprising has displayed the bravery of the al-Quds youths in the field and against the brutal Zionist machine.

Sayyed Nasrallah pointed to that the West Bank interaction and the calculated military intervention from the Gaza side is a very important development.

His Eminence further reiterated the resistance’s commitment, belief and adherence to its responsibilities towards the Palestinian cause, and called for more presence and suitable expression of hones and brave stances towards al-Quds and Palestine.

Additionally, Sayyed Nasrallah labelled the recent events as ones that stress the Palestinian people’s adherence to their rights and not abandoning any of them, adding that the latest heroic operation in the West Bank is a form of this insistence.

“The young Palestinian generations are still carrying their blood and souls, and are ready to sacrifice in the path of the coming victory.”

The Hezbollah leader, meanwhile, noted that the solidness of the Axis of Resistance, and its ability to overcome the most dangerous phase that targeted its presence in the region makes it necessary to raise responsibilities towards the Ummah’s cause.

“The Axis of Resistance is serious, honest, and true, unlike all previous words of Arab regimes,” Sayyed Nasrallah said, emphasizing that it is integrated, in solidarity, cooperation and coordination “in which we can feel that al-Quds is nearer.”

His Eminence also noted that “while we can witness the solidness of the axis of resistance despite the wars, blockade, and provocation, we also witness the collapse of other axes that had been leading wars against resistance in the region.”

In the same context, Sayyed Nasrallah pointed to the deep crises within the Zionist entity that started to surface strongly, while many Zionist analysts voice concerns regarding the survival of the enemy’s entity amid all such crises.

“Normalization should raise the voice of the Ummah’s free resistance, as it increases its responsibility to confront,” His Eminence said, noting that the normalizing countries’ have never been part of the battle so that their exit would never affect the track of this battle.

Additionally, Sayyed Nasrallah said that today’s responsibility is to present all kinds of support to the Palestinian resistance, and to strengthen the Axis of Resistance as it is this axis that shapes the future of the region.

Elsewhere in his remarks, Sayyed Nasrallah emphasized that the Zionists themselves know very well that this entity has no future, and it has a very short time to remain, and this is why they are wasting their efforts and blood in vain.

“The reasonable words to address all occupiers and invaders is that they have to leave the land they have occupied, otherwise they will be returned by force or by any other mean to the places they came from.”

At the end of his remarks, Sayyed Nasrallah underscored that as long as the Palestinian people are sticking to their rights and struggle, none of the defeatists will be able to abort the Palestinian cause because the resistance of this people is a proof to every Arab and Muslim, and every free human in the world [that they can achieve their goals].
Share It :
Related Stories 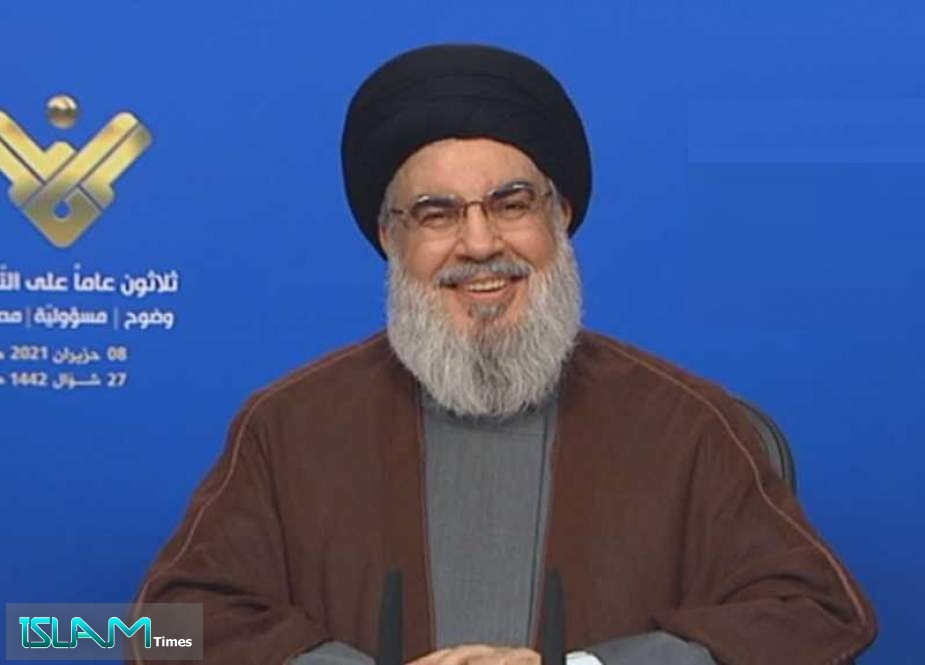