Story Code : 932029
Islam Times - Iraqi Hezbollah announced that it recognizes the UK red-handed in the recent attack on the Iranian consulate in Karbala.
In a statement released on Tuesday., the Iraqi Hezbollah wrote: "Destructive forces have repeatedly tried to disrupt our security and stability by stimulating the deceived groups."

"These groups are trying to involve the Iraqi people in the civil conflict," it added.

"The events in Karbala are also the result of clashes between conspiratorial groups and groups that seek to kill the Iraqi youth," it added.

"They are taking steps to disrupt the elections and create chaos so that they can prevent it from taking place."

Referring to the recent incident in the Iranian consulate Karbala, it said: "These groups did not consider the city of Karbala sacred and tried to lead it to chaos and destruction."

"The plot was planned at the British embassies in Baghdad and Beirut," the statement announced.

It added that the UK and all arrogant powers must pay the price for such measures.

News sources reported on Sunday evening that rioters had set fire on the outer wall of the Iranian consulate in Karbala.

Iran on Monday strongly condemned an attack on its consulate in the southern Iraqi city of Karbala and called on the Iraqi government to protect its diplomatic missions in the country. 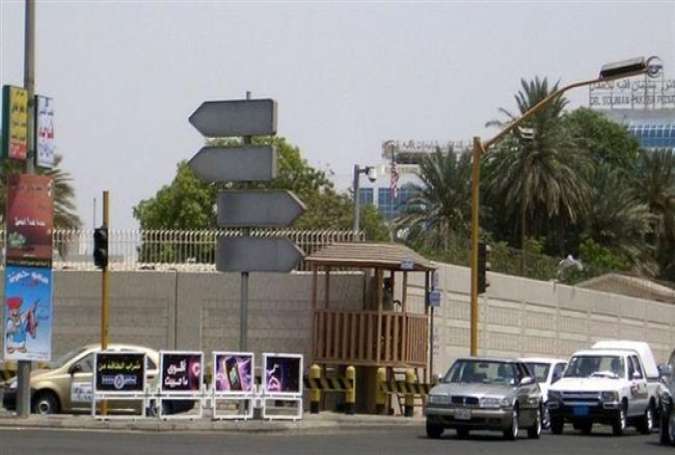 2 police officers injured in bomb blast outside US consulate in Jeddah
Islam Times - Two police officers have been injured in a bomb attack outside the US consulate building in Jeddah, Saudi Arabia.
Pakistani police forcibly stops protesters from reaching the U.S consulate in Peshawar
Thousands protest anti-Islam film outside US consulate in Canada
Libya rejects reports of 50 arrests over US consulate attack
Illegal ‘protection wall’ around US consulate in Peshawar is demolished
India arrests 86 protesters outside US consulate in Chennai
Iran condemns 'brutal' attack on its consulate in Iraq’s Basra
Sensitive documents discovered at US consulate in Benghazi
Comment
US Moves against Iran to Lead to Double Defeat for Washington
Bahraini Prisoners Detail Brutal Crackdown to Covid Protest
Republican Senator Blocks Aid to Palestine
‘Israeli’ Occupation Troops Arrest 25 Palestinians in the Occupied West Bank
Khashoggi Killers Trained in US
UN Backs Crimes Committed by Zionists against Palestinians: Islamic Jihad
US Terrified by Free Networks: Yemeni Official
US Presence in Afgahinstan, Source of Expanding Terrorism: Imran Khan
China Condemns Latest US Warship Transit of Taiwan Strait
NATO Continues to Reject Dialogue: Putin
US Triples Vaccines for Taiwan as Tensions with China Escalate
UN Whitewashing “Israeli” Crimes against Palestinian Children!
US Presence in Afgahinstan, Source of Expanding Terrorism: Imran Khan
20 Palestinians Injured As Zionist Settlers Attack Sheikh Jarrah Neighborhood
US May Slow Pullout from Afghanistan
China Condemns Latest US Warship Transit of Taiwan Strait
US Pulling Missile Defense, Other Systems from Saudi Arabia, Other Middle East Countries
Sisi Can Be Ousted Any Minute: Former Supporter
Yemeni Army Shoots Down 'US Spy Drone' over Ma'rib Sky
Secretary-general of al-Nujaba offers congratulations on the ‎victory of Iranian president-elect Raeisi in the elections
Featured Stories