Story Code : 7266
Cristiano Ronaldo's move to Real Madrid from Manchester United has been finalised, the Spanish club confirmed, with the Portuguese set to officially join the Spanish giants on 1 July. The £80m fee breaks the previous world-record of £56m, set earlier this summer, which Real Madrid paid for Milan's Brazilian forward Kaka.
United had accepted an offer from Real for Ronaldo on 11 June, after the player made it clear that he wished to leave Old Trafford. However, the deal could not be finalised until Ronaldo returned from holidaying in the United States, and now the Portugal winger has put pen to paper on a six-year deal.

"Real Madrid and Manchester United have signed a final agreement for the transfer of the rights of Cristiano Ronaldo from 1 July," a statement on Real's ­website said.

Ronaldo, who joined United in 2003 for £12.2m, is set to earn a reported €13m (£11m) a year in Spain, making him the highest paid footballer in the world. He will be presented at the Santiago Bernabeu on 6 July.

The acquisition of Ronaldo, 24, is just part of a sensational summer in the transfer market for Real, with the club having already added Kaka for £56m and Valencia's Raul Albiol for £12m. Despite an outlay of £148m, however, the spree looks set to continue, with Real linked to Bayern Munich's Franck Ribery, Valencia's David Villa and Liverpool midfielder Xabi Alonso.
Source : Guardian
Share It :
Related Stories 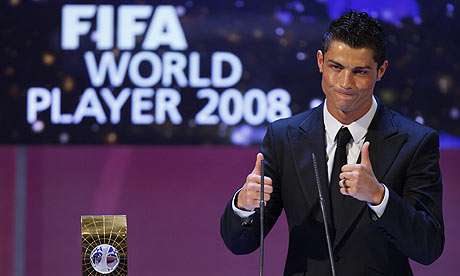