Story Code : 770883
Islam Times - Iranian Defense Minister Brigadier General Amir Hatami says the era of American order and Western hegemony has reached its end and time has come to usher in the post-West age in West Asia.
"The Islamic Revolution (in Iran) and the resistance in Syria, Iraq and Yemen show the reality that the West is not the center of regional developments anymore, and the compulsory US exit from Syria indicates the failure of their (the US) strategies in the region," Hatami said in an address to the International Conference on Defense and Security in West Asia in Tehran on Monday.

Last month, US President Donald Trump made an abrupt announcement to withdraw the roughly 2,000 American troops from Syria, claiming that the US had accomplished its goal of defeating Daesh.

“We have defeated ISIS in Syria, my only reason for being there during the Trump Presidency,” Trump said in his Twitter account, using an acronym for the terrorist group.

Chairman of the Chiefs of Staff of the Iranian Armed Forces Major General Mohammad Baqeri said on December 30 that the United States is only fueling insecurity in the Persian Gulf through its presence in the strategic region.

"The US exit from Syria was the humiliating withdrawal of a country that was present there without the consent and approval of the [Syrian] people and the legal government," Baqeri said.

Elsewhere in his address, Hatami said the West's greed played a leading role in triggering the ongoing developments in regional countries.

Unrest and war in West Asia have emanated from the failed ideology of Western countries, which created unrest and chaos in the region for their own interests, he added.

"West Asia is facing a sensitive era and peace and stability are being restored to this region due to the resistance of [regional] nations," the Iranian defense chief pointed out.

Hatami also touched on the US withdrawal from the landmark nuclear agreement, officially known as the Joint Comprehensive Plan of Action (JCPOA), reached between Iran and the P5+1 group of countries, including the United States, saying that Washington's move once again showed the real face of America more than ever before for everybody.

The decision also proved that the Americans would resort to every means to harm the independence of countries, he added.

"Those who have refused to fulfill their commitments [as per the JCPOA] have no right to speak about negotiations and making any comment in this regard is ridiculous," Hatami said.

US President Trump withdrew his country in May from the Iran nuclear deal and decided to re-impose unilateral sanctions against Tehran.

Under the deal, reached between Iran and six major powers -- the United States, Britain, France, Russia and China plus Germany -- Tehran agreed to put limits on its nuclear program in exchange for the removal of nuclear-related sanctions.

The US administration hoped to get the other parties to the deal with Iran to likewise scrap the deal, but instead, they stressed that not only would they stick to the agreement, but would also work to sustain it in the face of increased US pressure.

Back in December, Iranian Foreign Minister Mohammad Javad Zarif once again reiterated the ineffectiveness of US sanctions with regard to causing any change in the Islamic Republic's policies, saying that they only hurt "ordinary Iranians."

Iran will stand by Syria until full victory: Hatami
In a meeting with Syria's Deputy Defense Minister Major General Mahmoud al-Shawa, the Iranian defense chief hailed the resistance of Syrian government, nation and Armed Forces in their battle against terrorism.

The Syrian people have succeeded in repelling the "big danger" of terrorism in their country and the entire region, Hatami added, emphasizing that the Islamic Republic would stand by the Arab country until its final victory over terrorist groups.

Shawa, for his part, said the Syrian government, nation and Armed Forces managed to make recent achievements in the fight against terrorists thanks to Iran's support.

"At the present time, only one percent of Syria's soil is under occupation of terrorists through the US support, and will definitely take that one percent back from Daesh," he added.
Share It :
Related Stories 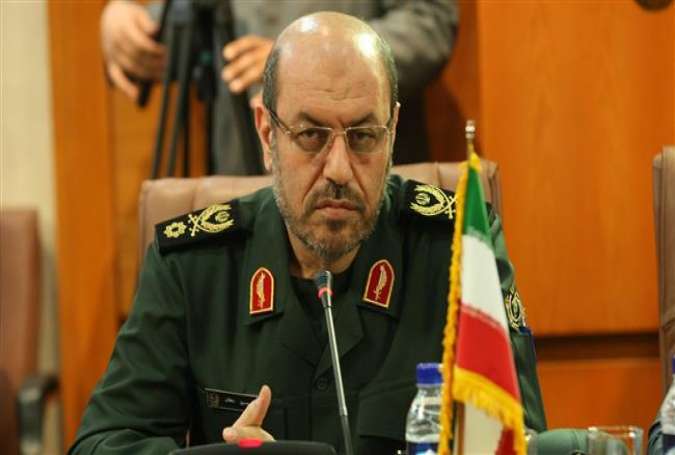 Zionist regime threat to West, including US: Iran minister
Islam Times - Iranian Defense Minister Brigadier General Hossein Dehqan says the West, including the US, is not safe from the threats of the Israeli regime.
Repetition of 2009 sedition will not be allowed: Iran minister
Saudi Arabia creating problems in Iran Hajj talks: Iran minister
Real oil price should be above $150: Iran minister
Israeli Annexation of West Bank to Spark Another Intifada: Hamas
Malaysia calls on the West to stop blaming Russia for the crash of MH17
Europe Unable to Sway West Asian Developments
Iran must not look to West on path of progress: Leader
Comment
Belarus President Says He Was ‘Intentionally’ Infected with Covid-19
Fire Hits High-speed Rail Station in Saudi Arabia’s Jeddah
Many Books Can Be Written on Crimes of Arrogant Armies: Ayatollah Khamenei
China Says Diametrically Opposed to US Bid to Extend Arms Ban on Iran
Brian Hook Stepping Down amid US Push to Extend Arms Ban on Iran
Exiled Saudi Intelligence Official Accuses MBS Of Sending Assassins to Kill Him in Canada
Lebanon Lauds Iran’s Backing
Sailor Reveals Troubled History of Doomed Ship That Brought Tons of Explosive Fertilizer to Lebanon
US, Zionist Entity Beneficiaries of Beirut Explosion: Abdollahian
China Sentences 3rd Canadian to Death on Drug Charges
Many Feared Dead, Hundreds Injured as 2 Huge Explosions Rock Beirut Port