Story Code : 864950
Islam Times - French Foreign Minister Jean-Yves Le Drian said that the annexation of the West Bank cannot go unanswered.
He made the remarks calling on the Israeli regime to refrain from any unilateral measures.

Referring to Netanyahu's decision to annex part of the West Bank to other occupied territories, Jean-Yves Le Drian asked the Israeli officials to abandon this plan.

“Annexing the West Bank could not go unanswered,” he added.

The Zionist regime seeks to annex more than 30% of the West Bank to its occupied territories in the near future, an act of aggression that has been criticized by many countries.

This move is based on Donald Trump's controversial plan for Palestine, known as the "Deal of the Century" which was proposed a few months ago and angered the Palestinians and was rejected by the international community.

In this plan, the Zionist regime is allowed to annex the West Bank towns and the strategic Jordanian Valley to the occupied Palestinian territories.

Some European countries have threatened to change the basis of their relations with Tel Aviv if the decision is implemented.
Share It :
Related Stories 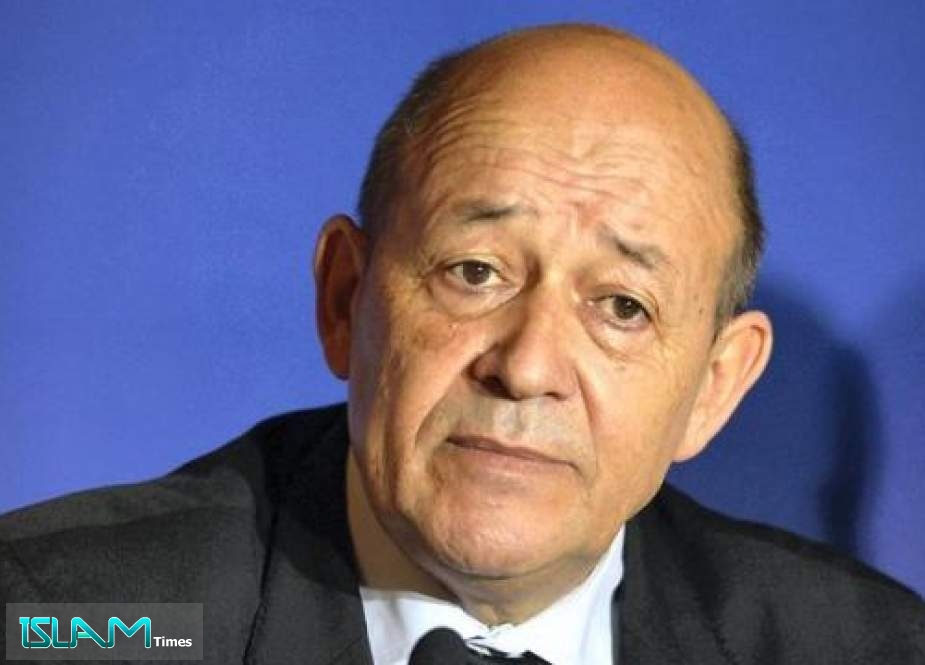 French FM Says Lebanon at ‘Risk of Disappearing’
Islam Times - French Foreign Minister Jean-Yves Le Drian said Thursday that Lebanon is at “risk of disappearing”, urging emergency reforms under a new government.
French FM warns Iran nuclear deal reactions could lead to ‘bellicose spiral’
French FM says his country will stay in Iran nuclear deal
French FM to visit Tehran for talks with Iran officials
French FM criticizes US for putting pressure on EU to change Iran deal
French FM Meets Hezbollah, Israelis Fume
French FM says to leave office
French FM to attend Palestinian flag-raising event at UN
Comment
Rouhani Tells Erdogan: War Not A Solution to Nagorno-Karabakh Conflict
Damascus Mufti Martyred in Explosive Device Blast in Qudsaya Town
Nigeria Crackdown: Buhari Warns Protesters, Fails to Address Shooting
Putin Says US Is Hardly The ‘Superpower’ It Used to Be
Study Finds Between 130k & 210k US Deaths Could Have Been Avoided
Iran Slams Israel’s ‘Institutionalized’ Discrimination against Palestinians
Chinese Leader Xi Jinping Sends Warning to US
As US Empire Disintegrates, It Becomes more Threatening
Deputy Commander: IRGC Surprises Waiting for Aggressors
Fiancee of Khashoggi Sues Saudi Crown Prince in US
Envoy: Russia to Respond to US Missile Deployment in Asia Pacific
Fearing Being Killed by Iran or Saudis… MBS Not to Normalize Ties with ‘Israel’ Now!
Iranian Military to Hold Drills that Test the Most Developed Weapons
Russia Says Not Afraid of US Sanctions, Will Resume Military Cooperation with Iran
Mossad Chief: Our Relations with Saudi Arabia Is Not Subject to Any Condition Or Obstacle
China Warns US It May Detain Americans over Prosecutions
As US Empire Disintegrates, It Becomes more Threatening
Saudi Arabia Says Believes in ‘Eventual Normalization’ with Israel
45 Lawmakers Urge US to Boycott Saudi-hosted G20 Summit
Turkey Withdraws from Base in Northwest Syria, Sources Say
Featured Stories