Story Code : 774154
Islam Times - Marzieh hashemi, who was released on Wednesday after spending 10 days in US detention without charge, has spoken to Press TV about her experience and how she is resolved to prevent others from being subjected to such mistreatment by the American justice system.
During a live interview with Press TV from Washington on Thursday evening, Hashemi said while she had long been "harassed" by American security officers during her previous trips to her homeland, the detention took everything to a “whole new level.”

“In general, when I travel throughout the United States and domestic flights… I always have to be at the airports three to three-and-a-half hours prior to flight just to make it through all obstacles,” she said.

The arrest
Hashemi said she was with her son, Reza, when the FBI arrested her and put her in handcuffs on January 13 before boarding a flight to Denver.

She spent the night at St. Louis airport before being transferred to the FBI’s headquarters in Washington, DC, the next day.

There, FBI agents kept telling Hashemi that she was not being charged while they took her fingerprints.

“Then, they said they had to get my DNA,” Hashemi said, adding the agents performed a DNA swap on her against her will.

She was then moved to Washington’s central jail and then to another detention facility, where she was “strip searched.”

“Our viewers know me, I am… a practicing Muslim and I do adhere to hijab,” she said. “So for me, a scarf is even important to wear in front of males and I was subjected to a strip search and I was not allowed to put my scarf on for the mug shot.”

Hashemi was taken to the court after spending a night in the facility’s “unbelievable conditions,” where she was incarcerated in solitary confinement next to other people from different nationalities that the FBI had detained for unknown reasons.

To get to the courtroom, Marzieh was forced to climb the stairs while in shackles because of the malfunctioning elevators that authorities had been unable to repair due to the ongoing government shutdown.

“The overall treatment… was one of sheer disrespect, disregard and no one should be treated like this,” she said.

“Yes, I live in Iran, I work in Iran right now, but I do come back and forth into the United States, it is my home and I have the right to come back here whenever I want,” she added.

Suicide watch
At one point, Hashemi said, there were guards sitting outside her cell that inmates later on said had her under a “suicide watch.”

“When I heard that… [I said] I know that I’m not going to kill myself, so there could be something else up here,” she said.

That’s when she asked one of the prisoners who was getting out to inform her daughter that “if anything happens to me she knows it’s not from suicide.”

The need to continue protests
Hashemi said she was “humbled” by global calls to free her, but the mission was far from accomplished as many others could face the same ordeal as long as the US justice system remained the same.

“I’ve always been a person to say what I believe, and to be a firm believer in trying to fight for what is right and what is true and very much against oppression,” Hashemi said. “So, people like me always pay a price.”

“What happened to me could happen to anyone, and it’s not about me, Marzieh Hashemi,” she added.

Hashemi doubled down on the need to change once and for all detention laws used as a “fear tactic” by US authorities to incarcerate innocent people without any charges as long as they pleased.

“I don’t believe that a majority of American people and people around the world believe that this should be allowed in a country that says it believes in human rights,” she added. “So I am calling and asking people to stand in solidarity and condemn these types of acts.”

“It is with fear that powers-that-be try to control those who believe in freedom. But ultimately, it’s the people united who can make changes and I’m asking to demand an end to this oppression that is taking place in the US judicial system,” Hashemi added.

“I just want to reiterate again, on Friday, tomorrow, that if there is a demonstration in your city, wherever you are in the world, that people come out for these protests,” she said.

'Fight until last breath'
Concluding her remarks, Hashemi reiterated her will to continue the fight at all costs.

“I will speak out until my last breath always,” she said. 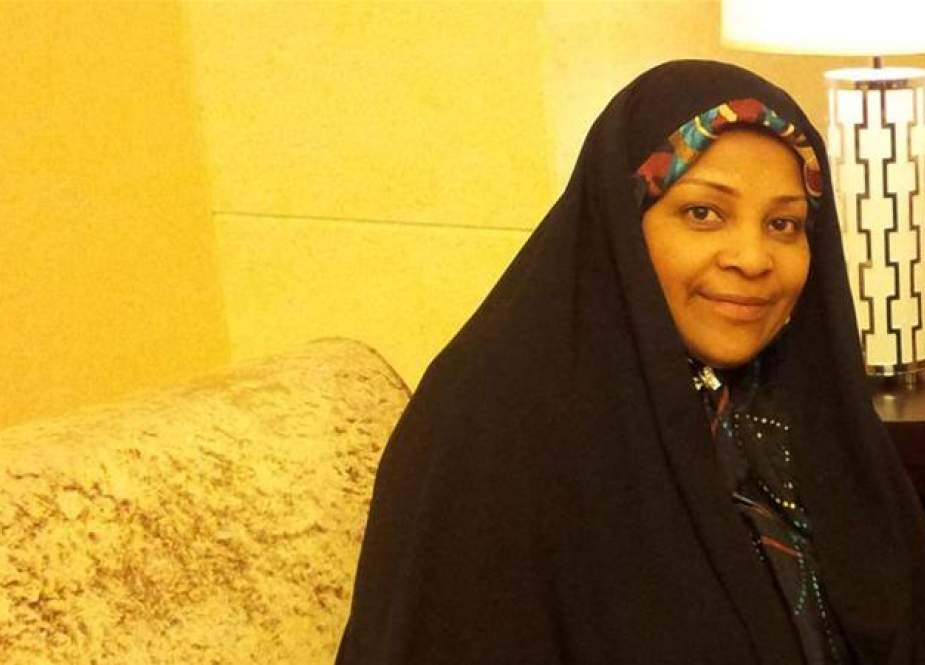