Trump has said the new “hard-hitting” sanctions will deny access to “key financial resources and support” for the Leader, his office and those “closely affiliated” with him.

US Treasury Secretary Steven Mnuchin has also said that Iran’s Foreign Minister Mohammad Javad Zarif would also face sanctions “later this week.”
Rouhani also mocked a US decision to “seize assets of” Ayatollah Khamenei as part the sanctions order, saying the Leader only owns “a Hosseiniyeh (Shia place of worship) and a simple house.

“Iran’s Leader is not like those of other countries, who have billions in an account abroad so you can sanction it, seize it or block it,” said Rouhani. “To sanction him for what? Not to travel to America?”

He added that the new sanctions — which will also target Zarif — prove the US was “lying” about the offer of talks with Tehran, which the White House has repeatedly put forwards over the past months in parallel with its pressure campaign and stepped-up military moves against the Islamic Republic.

“You (Americans) call for negotiations. If you are telling the truth, why are you simultaneously seeking to sanction our foreign minister, too? It is obvious that you are lying,” said the Iranian president.

Rouhani further pointed to Trump’s abrupt decision last year to withdraw the US from a 2015 nuclear deal with Iran and said it was Washington, itself, that disrupted a diplomatic process that was already underway between the two sides within the framework of the deal.

“You, yourself, refused to negotiate, disrupted [the  talks], reneged on your promises, annulled your own signature and told the world that you have no credulity and ‘not to trust us,’” Rouhani added.

“All that Iran needs to do is to walk through that open door.”

Bolton also complained about what he called Iran’s “deafening” silence on the offer.

Tehran has said it will not engage in negotiations with the US as long as Washington sticks to its economic pressure tactics against the Iranian nation.

Iran’s borders are ‘a red line’
Elsewhere, Rouhani pointed to the downing by Iran’s Islamic Revolution Guards Corps (IRGC) of a US spy drone, which had ignored numerous warnings and intruded into Iranian airspace last week.

He thanked “those who put (Iran’s) missile capabilities to use at the Defense Ministry and the IRGC,” adding that “people are happy with the country’s defense power.”

Iran, he added, used a domestic radar system and missile to detect and target the trespassing RQ-4 Global Hawk.

“We are not afraid of the US, but we’ve been exercising strategic patience,” said the president.

Rouhani said Iran’s borders are “our red line,” stressing, “when an aircraft crosses our borders, it is, in fact, crossing our red lines, and we are entitled to defend ourselves.”
Share It :
Related Stories 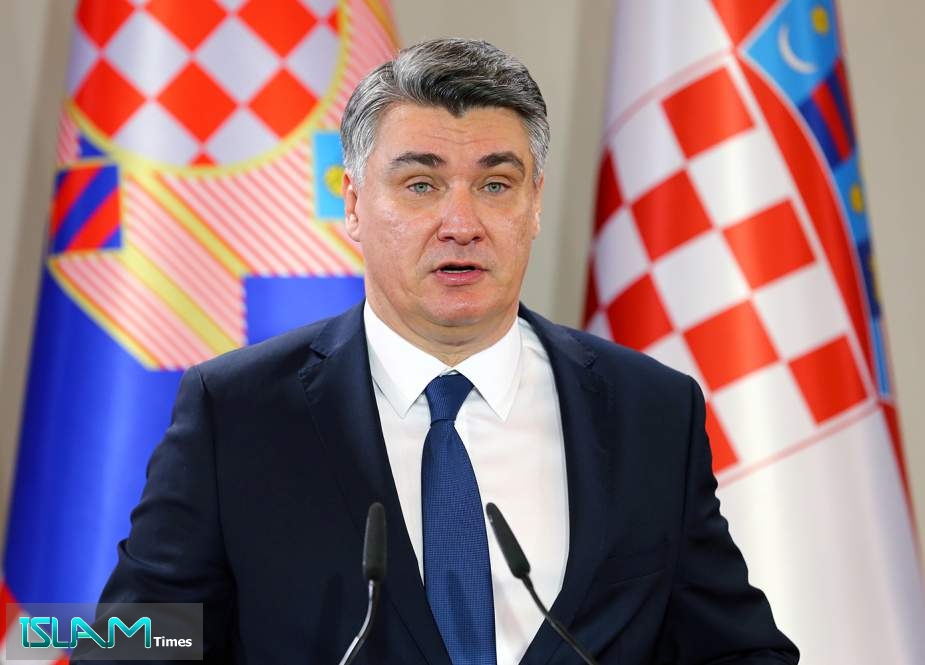 Rouhani Congratulates Croatia’s New President
Islam Times - Iranian President Hassan Rouhani forwarded a message of felicitation to the newly-elected President of Croatia Zoran Milanović, calling for further expansion of ties.
Rouhani Criticized EU Parties for Failing to Fulfill their JCPOA Obligations
Rouhani: There is Only Resistance to Confronting Enemies
Rouhani: Those Responsible for the Unforgivable Mistake that Brought Down a Ukrainian Plane would be Held Accountable
Rouhani: Iran-Turkey Cooperation Guarantees Regional Peace
Rouhani laughs at Johnson and reminds him of his political defeat
Rouhani, Putin, Erdogan to convene in Ankara Monday
Rouhani: No talks with US unless bans lifted, Iran rights respected
Comment
Yellow Vests Hit Streets of Lille in 67th Week of Protests in France
Syrian Air Defences Will Shoot Down Any Aircraft Violating Country's Airspace
Two Iranian Border Guards Killed in Clashes with Terrorists in Southeast
Israeli Occupation Forces Shot and Killed a Palestinian in Al-Quds
Sanders Slam Russia for Reportedly Meddling in US 2020 Elections
What We, the Taliban, Want
With Bloomberg Entering Race, U.S. Oligarchy Takes Stage
China To Maintain Close Communication and Cooperation with Iran to Defeat the Coronavirus
US ‘Playing Games’ With Taliban Peace Talks, Has ‘No Intention of Leaving Afghanistan’ - Academic
Russia Rejects Allegations It Carried Out Cyber Attack on Georgia
Creator Of BioWeapons Act Says Coronavirus Is Biological Warfare Weapon
People Rejoice as Syrian Army further Secure Aleppo Countryside