Story Code : 713527
Islam Times - Leader of Yemen's Ansarullah movement Abdul Malik Badreddin al-Houthi has stressed that Saudi Arabia will eventually face defeat in its all-out military aggression against the country just as it failed in Syria and Yemen.
Speaking in an exclusive interview with Lebanon’s Arabic-language al-Akhbar daily newspaper published on Friday, Houthi said Saudi Arabia's policies in Yemen are doomed to failure, stressing that the Riyadh regime has not shied away from killing thousands of women and children, targeting crowded markets and social events such as weddings and bombing densely populated neighborhoods, schools and mosques in order to realize its goal of occupying the entire Yemeni soil.

He added that the Yemeni media outlets have sought to expose the extent of the tragedy and horror that the Saudi-led military aggression haunts Yemen and its nation.

The Ansarullah leader went on to say that the unjust economic blockade against Yemen is also aimed at limiting the movement of ordinary people, including patients who are in need of medical treatment abroad, restricting humanitarian supplies, devaluation of local currency, drying up the salaries of civil servants, starving the Yemeni people and destroying factories plus service facilities.

“The Yemeni people have however remained steadfast, and managed to confront all forms of aggression much to the surprise of Saudi-led forces, which though the Yemeni people would surrender within weeks after the military campaign,” he pointed out.

Al-Houthi said, “Saudi Arabia is now in the midst of unprecedented attrition as its political, economic, security and military problems continue to exacerbate.

The Ansarullah chief said Saudi Arabia is being used "like a milking cow" by Americans, emphasizing that US President Donald Trump has been more successful than his predecessor Barack Obama to get money out of the Riyadh regime.

Elsewhere in his remarks, Al-Houthi pointed to Yemen’s missile capabilities, underlining that the main goal is to reach the level of deterrence.

“Our missiles can now reach the heart of enemy areas. They have reached Riyadh and Abu Dhabi. Above all, they have penetrated the US-made air defense systems which they heavily depend on. Our Burkan-2 (Volcano-2) ballistic missiles have reached al-Yamamah Palace in Riyadh and go even longer,” he commented.

Al-Houthi said Yemen's resigned president, Abd Rabbuh Mansur Hadi, and a number of his administration members are currently being incarcerated inside Saudi Arabia.

About 14,000 people have been killed since the onset of Saudi Arabia’s military campaign against Yemen in March 2015. Much of the Arabian Peninsula country's infrastructure, including hospitals, schools and factories, has been reduced to rubble due to the war.

The United Nations says a record 22.2 million people are in need of food aid, including 8.4 million threatened by severe hunger.

In other remarks, al-Houthi Houthi rebels has warned that his fighters would unite with Hezbollah against Israel if a war erupted in Lebanon or Palestine.

He added that "our announcement that we are prepared to send fighters in any Israeli war against Lebanon or Palestine, is based on our principles".

The Ansarullah leader point out that the Israeli regime is "a true enemy" for every Arab and Muslim country, and if Yemen had borders with Lebanon or Palestine, the Ansarullah movement would participate in fighting with the Lebanese and Palestinians.

"We will not be reluctant to send fighters in a new war. Many of Yemen's tribesmen are ambitious to fight against Israel, and they are looking for the day to participate along with the freemen of the Islamic nation against the Israeli enemy," he added.

He said they had informed Hezbollah's leader Sayyed Hassan Nasrallah of their intent to fight. The Ansarullah leader revealed that they had intercepted Israeli regime's military activities in the Red Sea and Mandeb Strait, and added that there had been some Israeli air strikes on the Yemeni coast. 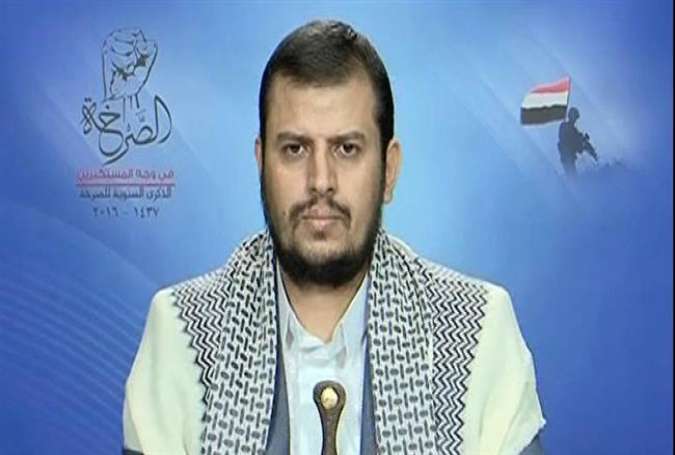