Story Code : 72264
Islam Times - Thousands of Egyptian protesters have gathered outside the Israeli embassy in the capital, Cairo, to support the Palestinians and their cause on the Nakba Day.
Islam Times reports from AFP: Protesters called for an end to Israel's 63-year occupation of Palestinian lands, which began on May 15, 1948.

Under the US-backed Mubarak regime, Egypt consistently served Tel Aviv's interests in the region by helping to impose a crippling blockade on the impoverished Strip after the democratically-elected Hamas government took control of the territory in 2007.

Egyptians have frequently called on their military rulers to abandon Israel and lift the blockade on the besieged Gaza Strip.

Egypt's political parties say the Gaza blockade serves the interests of Israel and the US and threatens regional stability and independence.

Meanwhile, the frontrunner in Egypt's upcoming presidential election, Amr Moussa, said he would not follow the country's past policies towards Israel.

"Any policy that goes against the public mood and the opinions it adopts is wrong, especially on sensitive matters such as Palestine," Moussa said in an interview.

"You can't have the people opposing the siege of Gaza, and a policy for the Gaza siege," he added.

Elsewhere in Turkey, activists gathered outside the residence of the Israeli Ambassador in Ankara to protest against the Western-backed, decades long occupation of Palestinian lands.

On Sunday, the demonstrators gathered in different cities across the Middle East to remember the Day of Nakba (catastrophe).
Share It :
Related Stories 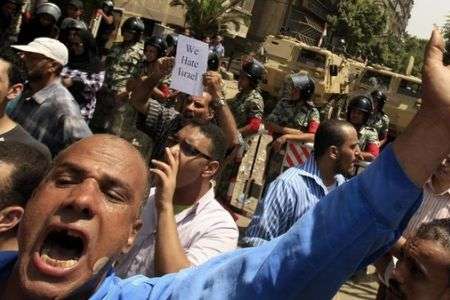